Kylie Jenner In A Wheelchair: Art Or Ableism? 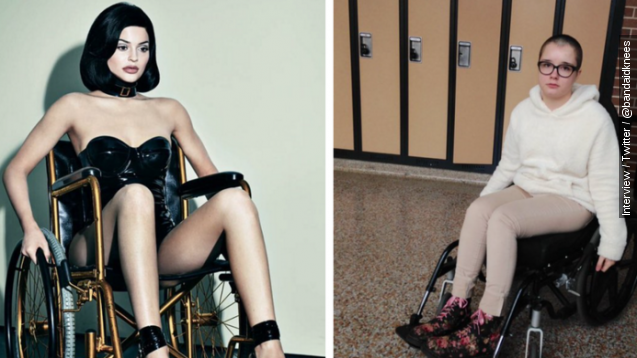 SMS
Kylie Jenner In A Wheelchair: Art Or Ableism?
By Cody LaGrow
By Cody LaGrow
December 3, 2015
The reality star is posing for the camera while sitting in a wheelchair, a move some advocates say is distasteful.
SHOW TRANSCRIPT

Kylie Jenner's recent spread in Interview magazine is creating buzz online after the reality star posed in a wheelchair for the cover. The publication is touting it as art while some people are labeling it ableism.

Merriam-Webster defines ableism as discrimination or prejudice against individuals with disabilities.

And it's a discrimination that affects people like Ophelia Brown, a 17-year-old girl who saw Jenner's cover and tweeted: "wow being in a wheelchair is so fun and fashionable! #Ableism is the ultimate fashion statement!"

Several other disability advocates spoke out against the cover as well.

It spurred Interview to release a statement to E! that said: "Our intention was to create a powerful set of pictures that get people thinking about image and creative expression. ... But our intention was certainly not to offend anyone."

Jenner has claimed to be an advocate against bullying. She started a #iammorethan anti-bullying campaign on Instagram that highlighted the beauty in differences and shared her experience with Ellen DeGeneres.

"So I kind of was online and just finding other girls and boys my age who have been bullied and have kind of overcome it and just done something amazing with it who inspire me. So I kind of wanted them to just use my platform and post their stories on Instagram to hopefully inspire my followers too," Jenner told DeGeneres.

Still no word from Jenner on the matter — just a selfie while playing reindeer games with her Porsche.