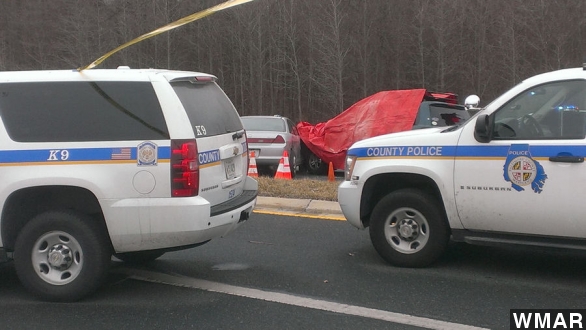 SMS
Ky. Triple Homicide Suspect Killed In Baltimore Shootout
By Matt Picht
By Matt Picht
February 15, 2015
Jason Hendrix, 16, who's believed to have shot and killed his parents and sister, was killed in a shootout with Baltimore police Saturday.
SHOW TRANSCRIPT

A 16-year-old boy from Kentucky is believed to have shot and killed both his parents and his sister before fleeing to Maryland, where he died in a shootout with police.

After getting into a high-speed chase in Baltimore County Saturday, Jason Hendrix crashed his car and fired on the officers pursuing him, wounding one. The officers returned fire, and Hendrix was shot and killed.

After identifying Hendrix, Baltimore police contacted authorities in Corbin, Kentucky, who investigated Hendrix's home. They found Hendrix's parents Sarah and Kevin, along with their daughter Grace, dead from gunshot wounds.

While the triple homicide wasn't discovered until Saturday, WLEX reports police believe the victims were shot late Wednesday. Hendrix was killed over 500 miles away from where the murders took place.

He told the outlet, "That was not the Jason we knew. There was no sign, nothing at all."

The officer who was shot in the incident was treated and released from the hospital Sunday.