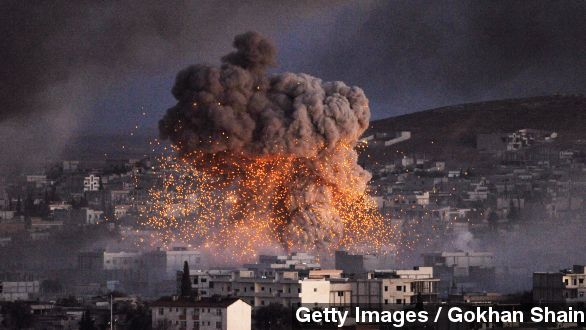 By Jake Godin
January 27, 2015
Kurdish forces claim they have completely liberated Kobani in northern Syria after months of fighting against ISIS.
SHOW TRANSCRIPT

That wasn't without the help of repeated U.S.-led coalition airstrikes, either. Just this past weekend, the Pentagon says 17 strikes were launched against ISIS fighters near Kobani.

But with ISIS already in control of a wide stretch of Syria's northern border, how much of a loss is their failure to take over Kobani? Some suggest it's more of a symbolic loss. (Video via Rudaw)

"It is to the Kurds, of course, a key victory. A huge propaganda loss for ISIS, who was suffering on many different fronts as well," says CNN's senior international correspondent Nick Paton Walsh.

Taking the city would have shown that ISIS was strong enough to endure coalition airstrikes, bolstering their image. Losing makes ISIS look weak. (Video via ISIS)

The loss hurt more than just ISIS' image, too. According to the Syrian Observatory for Human Rights, nearly 1,000 ISIS fighters died fighting to take the city.

And yet losing the city isn't exactly a huge loss for ISIS. At least not in the larger scheme of the war.

The group reportedly controls more territory now in Syria than it did when U.S. airstrikes began in August.

And the defeat may not be that big of a testament to the effectiveness of coalition airstrikes, either. At least not by themselves.

The New York Times notes it took more than 700 strikes in all to dislodge the group from Kobani. That's nearly three-quarters of all airstrikes launched in Syria since August. (Video via RT)

Even with ISIS out of Kobani, it'll still be awhile before residents who were forced to flee will be able to move back in. According to The Wall Street Journal, much of the city's infrastructure has been damaged or destroyed, leaving many areas without electricity or running water.