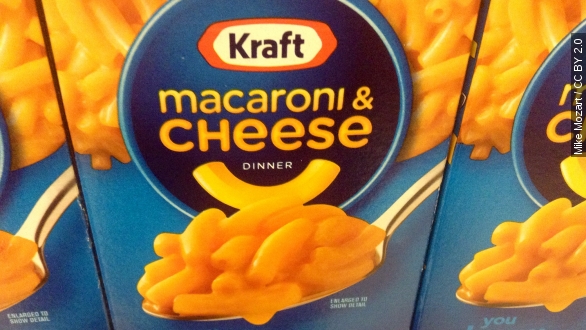 SMS
Kraft, Heinz Merger To Combine Iconic Brands (And Cut Costs)
By Cliff Judy
By Cliff Judy
March 25, 2015
Several everyday brands will merge as The Kraft Heinz Co. While the deal looks good for shareholders, its players are known for cost-cutting.
SHOW TRANSCRIPT

"But you're just trying to manipulate me so you can eat my Kraft Mac & Cheese," the little girl in Kraft's commercial said.

"You're wise beyond your years," the grandma responded.

Once Heinz officially buys a majority stake in Kraft, the two say they'll form the fifth-largest food and beverage company in the world and the third-largest in North America under the new name The Kraft Heinz Co. (Video via H.J. Heinz Co.)

An enormous number of everyday brands — besides the ketchup and mac and cheese — will be under the company's umbrella, including Jell-O, Velveeta, Philadelphia Cream Cheese, Maxwell House Coffee and Planters nuts.

The deal also brings some huge names to the table, one of them being Warren Buffett, whose Berkshire Hathaway owns part of Heinz and previously held huge stakes in Kraft. (Video via Fortune)

The other is Jorge Paulo Lemann, founder of Brazil-based 3G Capital and also part owner of Heinz. The two companies combined are expected to cut costs significantly. (Video via Falconi Consultores de Resultado)

"This is not just cost-cutting," Bloomberg's anchor said. "'Lemann' in Portuguese in Brazil is a shorthand for ruthless efficiency. They say: 'Costs are like fingernails. They must be cut constantly.' This is all that they do."

Indeed, the companies have already announced they expect savings potential to reach $1.5 billion by 2017, which will come from "the increased scale of the new organization, the sharing of best practices and cost reductions." (Video via Jell-O)

Buffett — long known as a fan of well-known brands with predictable earnings — said in a statement, "This is my kind of transaction, uniting two world-class organizations and delivering shareholder value."

And Kraft shareholders have to be pretty happy so far. The deal includes shares in the new company along with a dividend of $16.50 per share of Kraft. (Video via Kraft Foods)

Kraft's stock price also jumped roughly a third — or $20 a share — in opening trading Wednesday following the merger announcement. The two companies are expected to close the deal later this year.