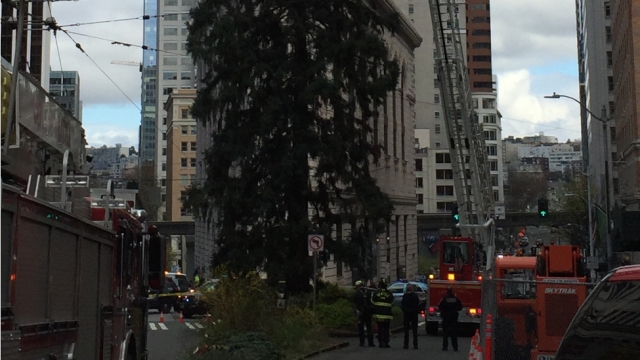 SMS
KOMO's Live Stream Of Seattle's #ManInTree Is Actually Hilarious
By Briana Koeneman
By Briana Koeneman
March 23, 2016
One local TV station in Seattle has been broadcasting live from the scene for hours. And the anchors' commentary is pretty entertaining.
SHOW TRANSCRIPT

A man climbed to the top of an 80-foot tree in downtown Seattle on Tuesday morning and has refused to come down, despite hours of coaxing from authorities.

But one local station's live stream of the strange event is arguably getting even more attention than the incident itself.

Along with other local media, a crew from KOMO began broadcasting from the scene shortly after the unidentified man made himself comfortable at the top of the large sequoia tree.

And after almost 20 hours, their conversations started to get a bit ... off-topic.

"Who do I support in 'Game of Thrones?' That's a great question," one reporter said.

"If this were, like, a few years ago, I would buy a ShamWow," the cameraman said.

Seattle residents aren't the only ones loving the hilarious live stream.

People from all over the country have been tuning in and raving about the stream on Twitter, calling the crew's commentary "classic," "entertaining" and "strangely mesmerizing."

As for the subject of the live stream, the now infamous #ManInTree was seen throwing an apple, small branches, orange peels and other objects at emergency crews trying to rescue him.

It's unclear exactly why he refuses to climb down. But here's to hoping KOMO will be on the scene when he finally does.

This video includes clips from KCPQ and KIRO and images from the Seattle Police Department.