Koch Industries Calls For An End To Partisan Politics 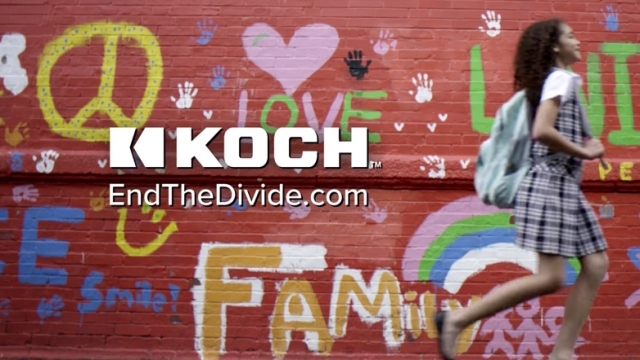 When you think of Koch Industries, you probably think of their dozens of products or the millions of corporate dollars spent for GOP candidates. But now the company is hoping to change your mind.

"We believe it's time. Time to remove the barriers, to end the divide. To replace winner-take-all with a system where we all can win," a narrator says during a Koch commercial.

That video is part of a campaign called "End the Divide." It was launched by the company on Friday and calls for Americans to put aside partisan politics. The campaign also vows the company will be putting more money and effort into enacting public policy and social change.

Charles Koch told USA Today: "Let's stop attacking people we disagree with and trying to silence them. Let's instead try to find common ground and learn from each other so we can innovate."

The campaign hits on issues like how the criminal justice system is "rigged" and disproportionately impacts the poor, and how government regulation hinders business growth.

Though the campaign may seem to be a strange fit for the conservative billionaires, the shift has been coming for a little while.

Koch officials recently got rid of an oppo-research unit created to gather information about liberal groups and Democratic candidates.

And the Kochs have been arguing for criminal justice reform for years, secretly pumping millions into campaigns to fix the system and teaming up with members of the right and the left who think it's broken.

Though critics are sure to say this is all a business strategy, the company has already made changes to its own policies to reflect the campaign. For instance, it's stopped asking potential employees about their criminal history on applications.

This video includes images from Getty Images and clips from Koch Industries, Fox News and ABC.