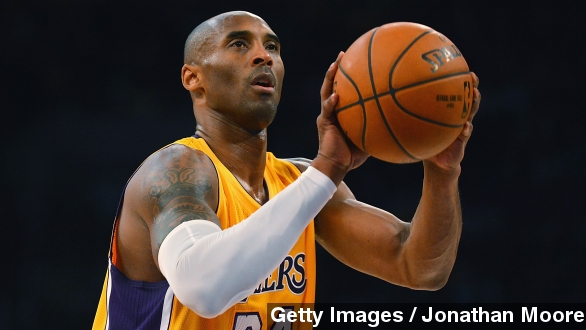 Kobe Bryant is officially better than Michael Jordan... when it comes to total points scored in a career that is.

In Sunday's win over The Minnesota Timberwolves, the Lakers' shooting guard passed Jordan for third place on the NBA’s all-time scoring list.

"Moments like this come around and you're really over-joyed by it. At the same time, you know that the end is pretty near. ... It took a minute to adjust but it felt pretty good to be appreciated," Kobe Bryant told reporters.

With Kobe's 26 points Sunday, his grand total sits at 32,310, still behind Karl Malone and the great Kareem Abdul-Jabbar on the all-time scoring list.

The Black Mamba's return to NBA stardom after missing a majority of last season was a story we were excited to follow this year, but this season has been difficult for the 36 year old.

Coming into Sunday's game, Bryant led the league, by sizable margins, in both field goals attempted (514) and field goals missed (315). Yet he's still among the league leaders in points per game, averaging 25.4.

Thing is, Bryant is well aware of the perception that he’s become a chucker. Here's how he responded in November when asked if he feels pressured to get the team going.

“I just try to keep us in the game man, I’d rather not have to do that, but you just can’t sit back and watch crime happen right in front of you,” Bryant said via Lakers Nation.

It's also no secret the 2014 Lakers aren't the best team Bryant's been a part of. They're essentially circling the drain in the Western Conference at just 8-16, which is nearly identical the winning percentage they had at the end of last season.

Bryant will need put up more than 4,600 points in the remainder of his career to pass Karl Malone on the all-time points list which, of course, wouldn't happen this season. So, if he wants to keep climbing the list, the career Laker would likely need to stick around for at least a couple more seasons.