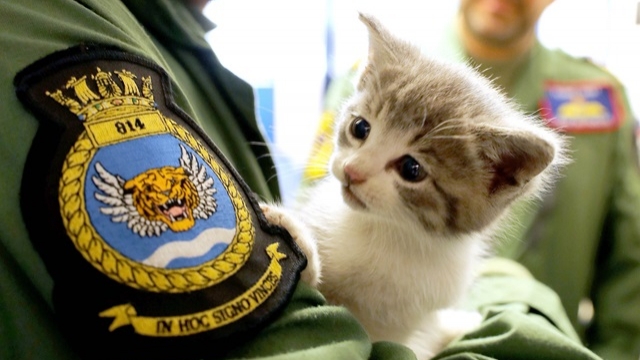 This is Tigger the kitten. He's alive after traveling about 300 miles inside the bumper of a car.

That car belonged to Royal Navy Lt. Nick Grimmer. And he heard the cat's meowing only a day after his long journey.

After dismantling his car, Grimmer and his colleagues discovered the little guy unharmed.

They're nicknamed "The Flying Tigers." And since the kitten had some striped markings, Grimmer decided to name it Tigger.

Grimmer now carries the animal around in his pilot's helmet, which he says is the only place Tigger will sleep.

The Royal Navy is now searching for Tigger's owners with the help of the hashtag #OperationTigerKitten on social media.

Brendan Spoors, the squadron's commanding officer, said, "We are more than happy to adopt 'Tigger' as a mascot; after all it's a tradition for Royal Naval units to have a ships cat!"