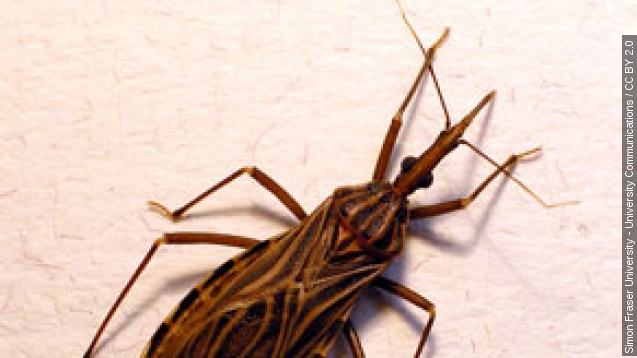 SMS
'Kissing Bug' Infections Are Growing In Texas, Health Officials Say
By Ryan Biek
By Ryan Biek
November 18, 2015
"Kissing bugs," named because of their affinity for biting faces and lips, have been spreading a potentially deadly parasite throughout Texas.
SHOW TRANSCRIPT

Texas health officials say "kissing bugs" have infected at least 12 people with a parasite that has the potential to kill.

"I've never left the United States. I've never even been on a cruise," a woman told KXAS.

"So it had to be here," a reporter for KXAS said.

"I was infected right here in Texas."

That comment should draw attention. Kissing bugs and the parasite they carry are usually only found in the tropics.

Kissing bugs got their interesting nickname because they favor biting human faces and lips at night. And the parasite they leave behind causes Chagas disease.

The disease has an acute phase much like the flu to start, before it transitions into a chronic phase, during which up to 30 percent of people develop heart problems and 10 percent develop gastrointestinal issues.

And in rare cases, Chagas disease can end in death.

The Centers for Disease Control and Prevention estimates 8 million people in Mexico and Central and South America are infected with Chagas disease, yet most don't even know it.

There's no approved treatment for the disease. The CDC only has experimental drugs, which reportedly can be up to 85 percent effective, but they have to be taken soon after a person is infected.

Most counties in Texas have reported kissing bug sightings. (Video via KXAS)

KXAS reports the rise in infections is more likely due to the growth of suburbs on land where the bugs are, instead of a greater number of bugs coming into the state.