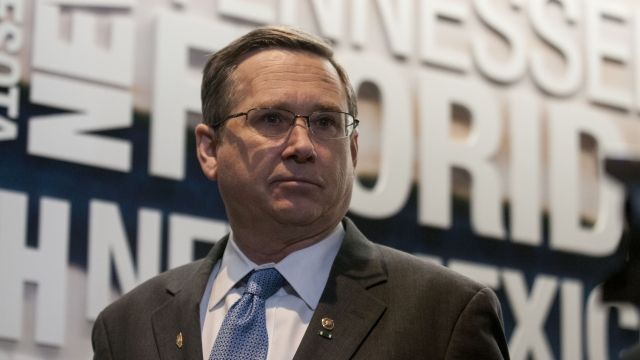 Illinois Sen. Mark Kirk has made national headlines for a cringe-worthy response to his opponent during a debate Thursday.

"My family has served this nation in uniform going back to the Revolution. I'm a daughter of the American Revolution," Rep. Tammy Duckworth said during the debate.

Yes, Rep. Tammy Duckworth's mother is an immigrant, but her father's family has traced its roots in service back to the American Revolution, as she later pointed out on Twitter.

Duckworth is an Iraq War veteran. She received a Purple Heart after she lost both her legs when her helicopter was shot down.

Kirk also served his country — 24 years in the Navy Reserve.

He apologized to Duckworth in a tweet Friday morning.

Aside from the comment itself, the moment is getting a lot of attention because Kirk has been seen as possibly the most vulnerable Republican senator facing re-election. He was one of the first Republican politicians to disavow Donald Trump.

Trump's campaign manager tweeted on Friday, "The same Mark Kirk that unendorsed his party's presidential nominee and called him out in paid ads? Gotcha. Good luck."

Kirk has faced continued questions about his ability to serve in the Senate, including from the Chicago Tribune, following a major stroke he suffered in 2012.

You might remember him from this moment: his return to the Capitol, flanked by his friend Democratic Sen. Joe Manchin and Vice President Joe Biden in 2013.

Kirk has made other controversial comments about President Barack Obama and Sen. Lindsey Graham over the past two years.