Kim Kardashian Is Naked (Again) And People Are Mad (Again) 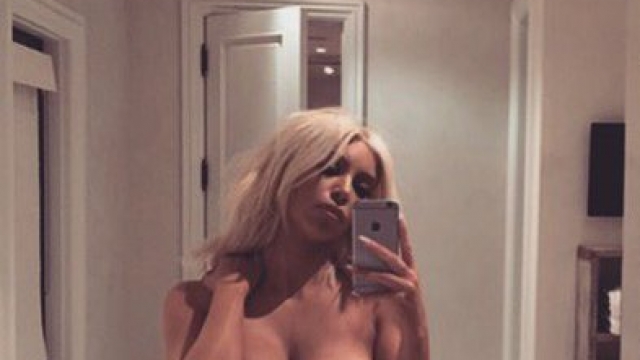 By Cody LaGrow
March 8, 2016
Another nude selfie from Kim Kardashian sparks a debate on slut-shaming and expectations we set for mothers.
SHOW TRANSCRIPT

Kim Kardashian brought breasts to a gunfight. And the womanly weaponry of sorts triggered a social media sparring so worthy of the "West" last name.

Kim posted this throwback nudey with the caption, "When you're like I have nothing to wear LOL." And then Hollywood wanted to help her find something to throw on.

Piers Morgan joked about Kanye West being $50 million in debt, and then asked if Kim needed help buying clothes. Kardashian said he was "on some Ashley Madison type s***" for offering to purchase apparel for a married woman.

Bette Midler suggested Kim swallow the camera if she wants us to see a part of her we've never seen. Kardashian later called her a fake friend.

And Chloë Grace Moretz asked Kim K to set more important goals for women. Kim then called her a no one and passive-aggressively complimented her recent magazine cover.

Then it all got so ... "Kanye" when Kim justified her behavior because she just cashed an $80 million check, because making money must mean you're making sound decisions, right? To celebrate, she posted another nude selfie with the caption "#liberated."

The aftereffects: Kim feels free enough to keep breaking the Internet in the buff, Chloë Grace Moretz was accused of slut-shaming, and Piers Morgan said it's time to pass the baton to the next sex symbol, seeing that Kim is a mother of two.

So, Happy International Women's Day, where (whether you like it or not) Kardashian has generated a conversation regarding body-shaming in women, expectations for mothers and how to clap back at everyone wearing clothes online.

This video includes clips from E! and images from Twitter and Getty Images.