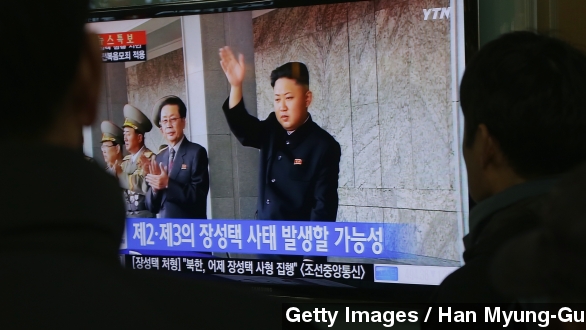 Kim Jong-un's public appearances often carry deliberate messages and even threats to South Korea. For months this year, we didn't see him at all.

"If the atmosphere and environment are there, there is no reason not to hold a high-level summit," Kim said on state-run media KCNA, which was also broadcast by South Korean networks like Arirang. "We will make every effort to advanced dialogue and cooperation."

So color South Korea pleased, if skeptical, of the North Korean supreme leader's annual New Year's Day speech where he said he was open to restarting dialogue with the South.

South Korea called on Kim in recent days to reopen talks on several issues, including the reunion of families separated by the Korean War. The two countries have negotiated such reunions sporadically over the years. (Video via CCTV)

South Korea's unification minister quickly put out a press release quoted by Yonhap. "We hope North Korea responds to our dialogue offer if it has a genuine will to improve inter-Korean relations."

But in the same speech, Kim also criticized the South for its joint military drills held with the U.S. each spring. The drills undeniably irk the North each year and have led to tension, threats and even the two sides firing warning shots at each other. (Video via CBS)

So far, there's no reliable indication on whether these talks between the North and South will actually happen.

Along with a flurry of stories posted to KCNA's homepage documenting and praising Kim's actions leading into the New Year, KCNA also aired footage of Kim apparently flying a plane with the help of two assistants. (Video via The Telegraph / KCNA)