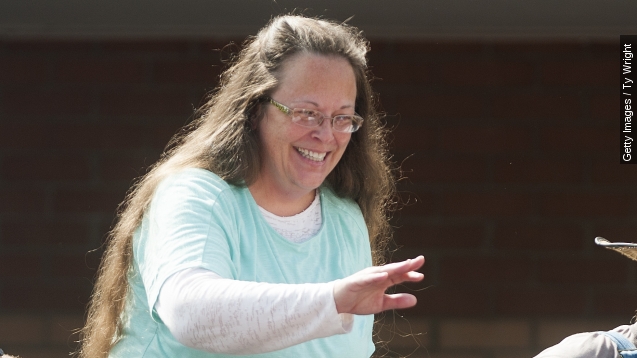 Kentucky clerk Kim Davis returned to work Monday and says she won't prevent her deputy clerks from issuing marriage licenses, but she won't be authorizing them. (Video via YouTube / davidvmoore1976)

Davis says any marriage licenses issued will not have her name, title or authority on them. (Video via NBC)

"If any of them feels that they must issue an unauthorized license to avoid being thrown in jail, I understand their tough choice, and I will take no action against them. ... However, any unauthorized license they issue will not have my name, my title or my authority on it. Instead, the license will state that they are issued pursuant to a federal court order," Davis said. (Video via Fox News)

Davis was jailed for six days for being in contempt of court after she refused to issue marriage licenses to same-sex couples. She was released Sept. 8. (Video via CNN)

Presidential candidate Mike Huckabee has supported her actions, saying "Let Kim go, but if you have to put someone in jail, I volunteer to go."

Davis is an elected official and cannot be fired.