Kim Davis Joins Supporters To 'Eye Of The Tiger' 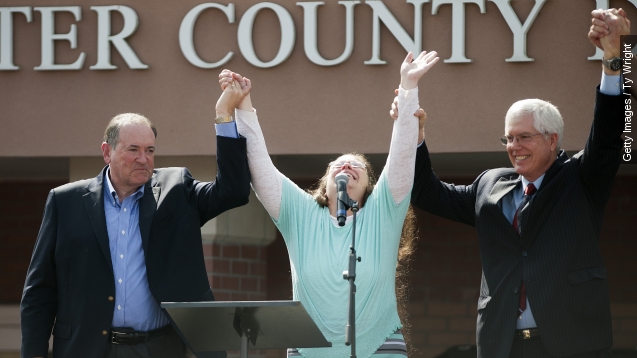 SMS
Kim Davis Joins Supporters To 'Eye Of The Tiger'
By Zach Toombs
By Zach Toombs
September 8, 2015
The Kentucky clerk who refuses to authorize marriage licenses for gay couples was freed from jail Tuesday after five days.
SHOW TRANSCRIPT

Kim Davis is out of jail after five days. She joined supporters as "Eye of the Tiger" played. But a judge says Davis can't keep marriage licenses from gay couples.

She was joined by her husband and by Mike Huckabee. The candidate has aligned himself with Davis' cause.

"I'm not willing to spend one day under the tyranny of people who believe they can take our freedom and conscience away," Huckabee said.

A judge jailed Davis last week for contempt of court. Her lawyer says she will still apply her beliefs to her job, which could land her in further legal trouble.