Killing Innocents: Assad's Actions Are Louder Than His Words 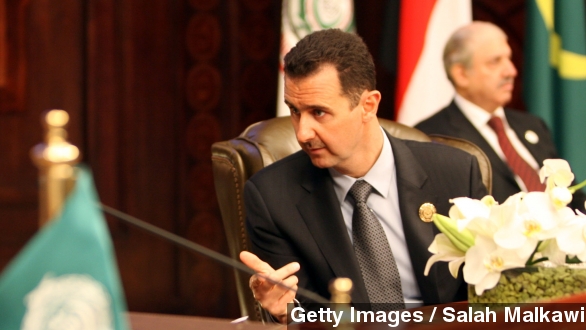 At least that’s what Syria’s dictator told a Czech publication in an interview published Wednesday. In it, he also condemned the Paris attacks.

As a reminder, this is who we’re talking about.

“We have high confidence that chemical weapons were used and that Assad used them,” President Obama said in September 2013.

“This is what Assad did to his own people,” U.S. Secretary of State John Kerry said.

It's estimated Syria’s civil war has killed at least 200,000 people since it began nearly four years ago. The conflict has pitted the Assad regime against different rebel groups, including ISIS. (Video via Hazzm Movement)

The United Nations says both sides have committed human rights abuses. In December of 2013, the U.N. accused Assad himself of war crimes, which the country's deputy foreign minister has called "nonsense."

This video includes images from Getty Images and Freedom House / CC BY 2.0.