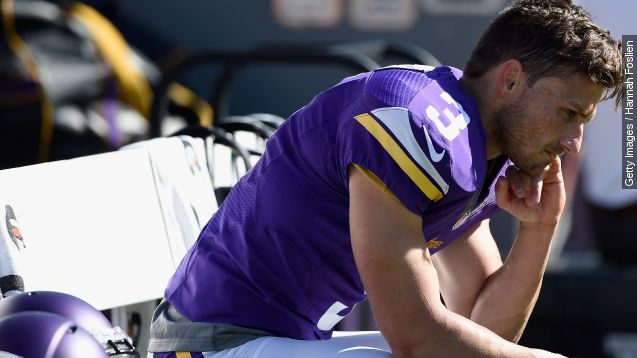 SMS
Kids Try To Cheer Up Vikings' Blair Walsh After That Field Goal Fail
By Christine Slusser
By Christine Slusser
January 13, 2016
First-graders in Minnesota wrote letters to the Vikings kicker after his missed field goal led to the team's loss Sunday.
SHOW TRANSCRIPT

Minnesota Vikings kicker Blair Walsh missed what would have been a game-winning field goal with just seconds left in the game against the Seattle Seahawks on Sunday.

But a group of first-graders in Minnesota want him to know it's OK.

"Dear Blair, I feel bad for you," one student said.

"You are still so good at football,"another student said.

"Keep on trying. We love you so much," a student read out loud.

"You were so close," a classmate read to WCCO.

"We love you, Blair!" everyone in the class shouted.

"He was so close to getting it up there," a student said.

"He was so close to making it, but he missed it. He was crying at the end. It was sad," a student told KARE.

The teachers turned the devastating missed field goal into a lesson on empathy, having the children write Walsh letters of encouragement.

Yeah, it's pretty cute. The teachers came up with the idea after the first-graders came to school repeating things their parents had said — like, "He should be fired."

We're not sure if Walsh has received the letters yet, but he hasn't posted on Twitter since the miss.

But he seriously shouldn't kick himself too hard. Well, mainly 'cause we saw what happens when he tries to. Oh, maybe we need a lesson in empathy.