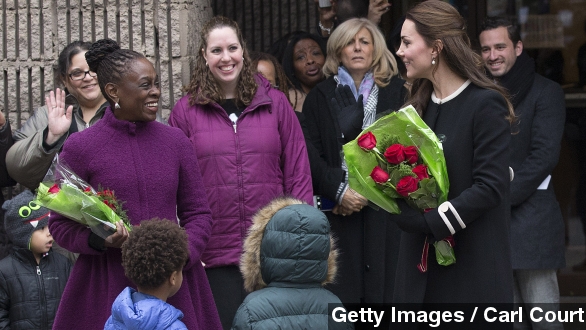 SMS
Kids Expect Princess Elsa, Must Settle For Princess Kate
By Lauren Zima
By Lauren Zima
December 9, 2014
Children in Harlem were told a princess was coming to visit them Monday, so they expecting to see the blonde beauty from “Frozen.”
SHOW TRANSCRIPT

Americans are flipping out over the visit from Prince William and Kate Middleton, but little kids are a whole different breed to impress. Watch Princess Kate’s visit with children in Harlem Monday.

“Staff told the duchess some of the kids were expecting a Disney princess.”

“You know they think you’re out of ‘Frozen’?” one staffer told her.

Bit of a grimace from Kate there... (Video via NBC)

...it’s unclear whether the children recognized she was the princess they’d been planning for. (Video via ABC)

“Do you remember who’s coming to visit you today?” the kids were asked.

“That’s right,” they were told.

The kids, ages 3-4, had been planning and prepping at the Northside Center for Child Development, just not for the right royal. (Video via Walt Disney Animation Studios)

“It’s a letter for the princess,” a child explained of his project.

Saturday The New York Post reported the children were readying a gift for, according to one of one child, “the princess in the castle.”

Well, she does live in a palace.

And The Mirror noted other comparisons, jokingly wondering if Kate really is Princess Elsa? Notably,  they have similar senses of style — aka they both occasionally wear ball gowns.

Those gifts the kids had readied for her? They presented the princess with flowers and handmade picture frames.

And Kate helped with presents too; while she was there she helped wrap Christmas gifts that will be donated.

But even though they might not have known who she was, Princess Kate did ask the kids about their love for “Frozen.” Perfect grace from a princess.