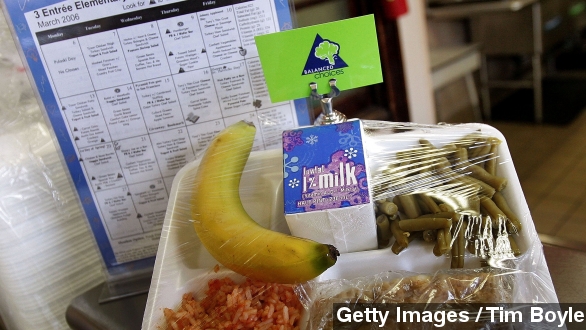 How do you get kids to eat their fruits and veggies? Parents, educators and governments have struggled to come up with a clear solution, but a new study suggests the answer might have been right under our noses the whole time. (Video via Buena Vista Television / "Recess")

Brigham Young University and Cornell University researchers found that children who eat lunch after recess ate more fruits and veggies than kids who ate before. That's likely because they were just hungrier.

New federal guidelines require schools to include healthier food in kids' lunches. But getting them to eat it is a challenge.

"The children didn't have options. They had to take what was there, and it's not what they wanted to eat," said Voorheesville Central Superintendent Teresa Thayer Snyder.

Researchers say moving lunch after recess is a "no-cost" way to make sure kids are getting the nutrients they need.

"It's not always what's on the tray that matters; sometimes it's what you're doing before or after lunch that makes the difference," researcher Dr. David Just said.

Study authors also noted when kids ate their lunches after recess, they were much calmer and ate more slowly, instead of rushing to get to play time sooner.

Researchers observed students at seven elementary schools. Some of those schools had recess before lunch, and others did not.