The Khan Family Calls Trump Out After Second Presidential Debate 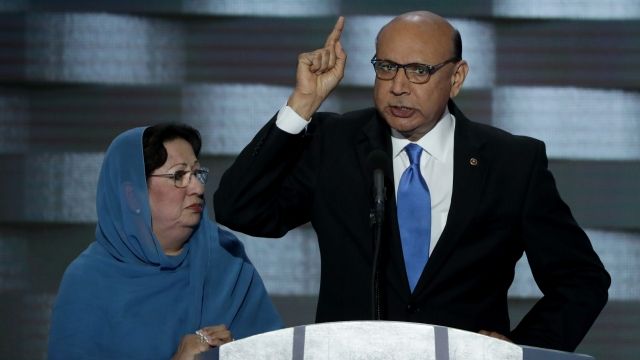 By Lindsey Pulse
October 10, 2016
Donald Trump spoke about the late Capt. Humayun Khan at the second presidential debate. The Khan family called him out.
SHOW TRANSCRIPT

"First of all, Capt. Khan is an American hero — and if I were president at that time, he would be alive today."

That was Donald Trump's first response when debate moderator Martha Raddatz asked him if his stance on a complete Muslim ban has changed. The Khan family wasted no time in responding to the candidate's answer.

Khizr and Ghazala Khan are the parents of Humayun Khan, who died serving in Iraq in 2004.

They wrote, in part: "Our son served this country with honor and distinction, and gave the ultimate sacrifice. The only thing that Donald Trump sacrifices is the truth."

And the responses to Trump's comments don't end there.

A staffer for the Clinton campaign tweeted "go f*** yourself" almost immediately after Trump made the statement. The staffer later apologized for the profanity on his personal account.

Tensions between the Khan family and Trump became very public at the Democratic National Convention. Khizr Khan spoke at the DNC in response to Trump's plans to bar Muslims from entering the country.

Khan criticized Trump for claiming to have made sacrifices throughout his career. Khan said that Trump has "sacrificed nothing and no one."