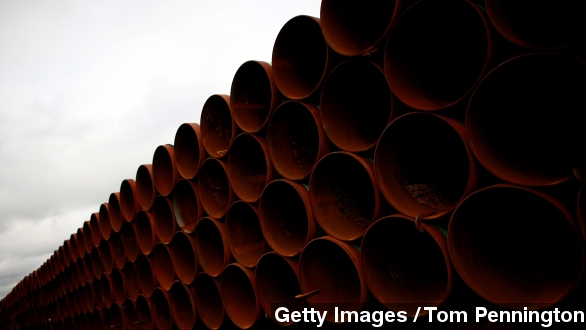 The Senate just approved a bill its largely Republican supporters call "an extraordinarily important jobs bill" and its opponents describe as "a special interest bill that's a giveaway to foreign oil and steel companies and will do nothing to benefit the American people."

Hard to believe they were talking about the same thing on the same day: legislation that would approve construction of the Keystone XL Pipeline. Every Republican in the Senate plus nine Democrats voted to approve the bill Thursday afternoon.

As we reported, Canadian energy giant TransCanada Corporation would be building the expansion, having already built the Gulf Coast Pipeline, which runs from Oklahoma to the Gulf, for which it hired American workers. (Video via Transcanada Corporation)

The last part of the expansion awaiting approval is the northern leg, which runs from Alberta, down through Montana and South Dakota to Nebraska. (Video via The New York Times)

The president has promised a veto, and argues the jobs the bill’s supporters say the project will create are only temporary.

As we previously reported, the House had passed a similar version of the bill earlier this month. This means both now-passed versions will have to be reconciled. That could take days.

Speaking of that veto threat: Had supporters been able to get five more yes votes to make 67, they would have been able to override the president.