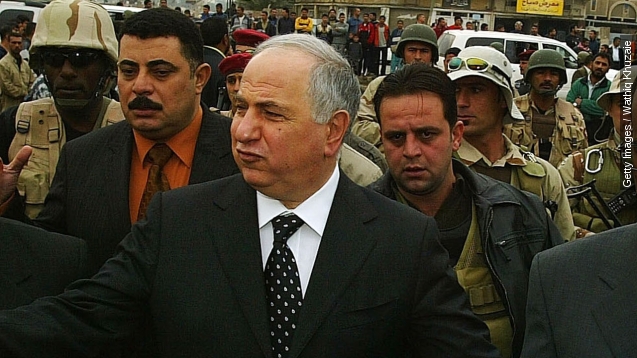 By Matt Moreno
November 3, 2015
Chalabi was a key figure in persuading the U.S. and President George W. Bush to invade Iraq in 2003.
SHOW TRANSCRIPT

Iraqi politician Ahmed Chalabi has died at the age of 71.

Reports say Chalabi died of a heart attack at his home in Baghdad.

Chalabi was probably best known for his influence in the U.S. invasion of Iraq in 2003. (Video via Al Fayhaa)

President George W. Bush ordered the invasion of Iraq in 2003, responding to fears the country was storing "weapons of mass destruction."

"American and coalition forces are in the early stages of military operations to disarm Iraq, to free its people and to defend the world from grave danger," President Bush announced in 2003.

The information came, in large part, from Chalabi.

"I believe the U.S. will find weapons of mass destruction. They have certainly already found the technology," Chalabi said.

"And the information was spectacularly bogus," CNN reports.

Chalabi's key role in the highly questionable Iraq war made him infamous in the U.S.

"He's somebody who knows how to get things done, but there's a lot of baggage that you buy when you hire Ahmed Chalabi to do virtually anything," former CIA senior official Robert Grenier told NBC.

After a fallout in Iraq and the U.S., he eventually rose back to power. As recently as 2014, Chalabi was considered a strong candidate to replace Nouri al-Maliki as prime minister. (Video via Press TV)