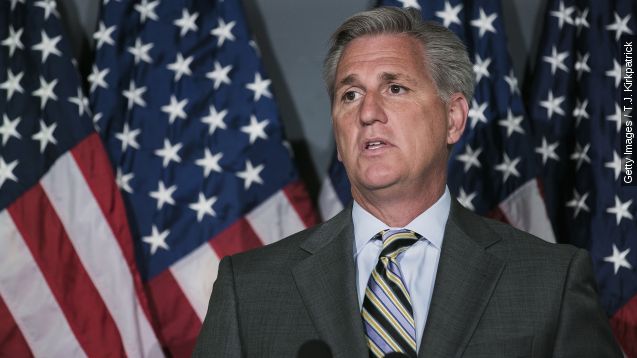 “If we are going to unite and be strong, we need a new face to help do that. Nothing more than that. I feel good about the decision,” Rep. Kevin McCarthy said.

Kevin McCarthy has dropped out of the race for House Speaker.

As House Majority Leader, McCarthy was the favorite to replace John Boehner — even winning an endorsement from the speaker himself. (Video via House Republicans)

“Uh, listen I’m not going to be here to vote on the next Speaker, that’s up to the members. But having said that I think Kevin McCarthy would make an excellent Speaker," Boehner said.

The gig seemed McCarthy’s for the taking — that is, until he handed this little gift to the other party.

"Everybody thought Hillary Clinton was unbeatable, right? But we put together a Benghazi special committee, a select committee, what are her numbers today?” McCarthy told Fox News.

McCarthy ended walking back his suggestion that the Benghazi committee was politically motivated, but not before the Clinton camp featured them in a new campaign ad.

Now, with McCarthy’s sudden exit, the search for Boehner’s successor turns to a handful of other House Republicans, including Utah Rep. Jason Chaffetz, who chairs the powerful House Oversight Committee, as well as Florida Rep. Daniel Webster who is backed by the House’s conservative Freedom Caucus.

As for Boehner, he says he’ll stay on stay on as speaker until the end of the month.