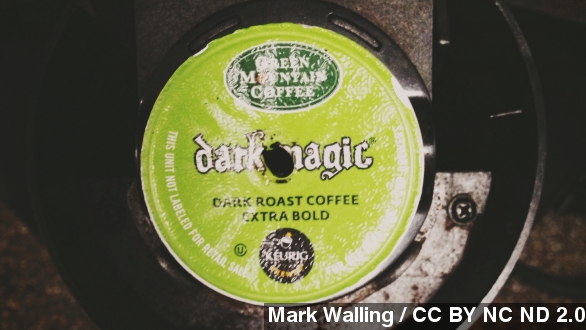 SMS
Keurig Co-Founder Says Company Has A Waste Problem
By Christian Bryant
By Christian Bryant
March 5, 2015
Keurig co-founder John Sylvan told The Atlantic he doesn't even own a Keurig because they're too expensive and produce too much waste.
SHOW TRANSCRIPT

If you're a coffee drinker, chances are you've at least heard of Keurig's K-Cups — small pods for easy coffee brewing. But the single-use plastic cups have got their fair share of critics saying they create a huge amount of waste.

And video demos showing how to defeat Keurig's attempt to keep people from using those pods in its machines.

And then there's this: a monster made out of non-reusable, non-biodegradable K-Cups.

But surprisingly enough, the latest voice to speak out against K-Cups is one of the people who helped create them.

John Sylvan, co-founder of Keurig, told The Atlantic in an exclusive interview he doesn't own a Keurig because, "They're kind of expensive to use," and added he feels bad that he ever created K-Cups — partly because of how much waste they produce.

Keurig's waste problem has been reported on before. The New York Times reported in 2010 that Green Mountain Coffee —which later bought Keurig to form Keurig Green Mountain — saw growth "fueled by a product that runs counter to its reputation." The company was touting a green, sustainable philosophy while putting out single-use plastic pods.

Of course, it's not that K-Cups aren't at all recyclable, it's that users would have to manually separate the components of every cup — the tin foil, filter and plastic — for it to become recyclable. And really, how many people do that?

Plus, K-Cups are made of #7 plastic, which is accepted by fewer recycling centers than other common plastics. That means of the 9 billion K-Cups that Keurig sold last year, the vast majority were likely thrown out.

Which brings us back to this "Kill the K-Cups" video with the monster made of plastic pods. Keurig's chief sustainability officer told NPR the video is "warranted criticism," adding "We're not proud of where we are right now, and we're committed to fixing it."

According to The Atlantic, Keurig Green Mountain has been working on a sustainability solution since 2010. The company said it plans to create 100% recyclable K-Cups by 2020 by using a more easily reusable plastic.