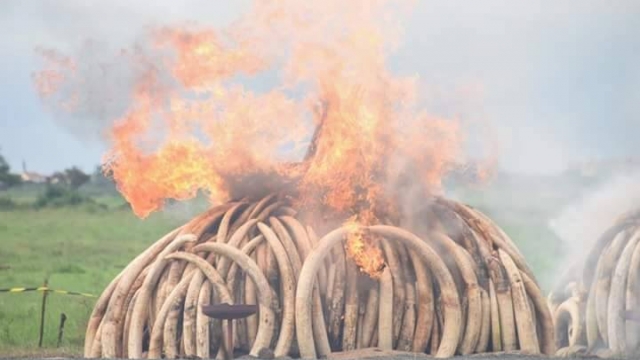 SMS
Kenya Sends Ivory Poachers A 105-Ton, Burning Message
By Samantha Crook
By Samantha Crook
May 1, 2016
The Kenyan government made its political point, suggesting doing anything other than burning its ivory would have been immoral.
SHOW TRANSCRIPT

On Saturday, Kenya burned more than 100 tons of ivory from thousands of elephants, despite criticism that the government was wasting a commodity it could make millions from.

"We are not watching any money go up in smoke, because from our perspective, there is no intrinsic value. Kenya believes that the only value of the ivory is tusks on a live elephant," Kenya Wildlife Service Director General Kitili Mbathi said.

In 1989, the Kenyan government set the precedent for the large-scale destruction of ivory by burning 12 tons of elephant tusks in the same park where Saturday's burn took place.

Oddly enough, ivory doesn't actually catch fire without lots of help from accelerants, like kerosene and diesel. The man organizing this weekend's burn admitted it'd be easier to crush the ivory but told NPR, "It wouldn't be as dramatic."

The U.S. has also publicly destroyed ivory. The U.S. Fish And Wildlife Service crushed 1 ton of ivory in Times Square last summer to educate the public on poaching and send a message to ivory traffickers.

But destroying huge quantities of ivory doesn't come without criticism. Some would prefer Kenya's government sell the ivory and use the money for elephant conservation efforts.

Kenya's president justified the government's decision in an editorial by putting it this way: "No one would be surprised if I said I was going to burn illegal drugs; everyone knows that whatever the price they would fetch if sold, they should not be sold."

And as supporters of the burn have pointed out, selling the ivory instead of destroying would require selling it to corrupt markets.