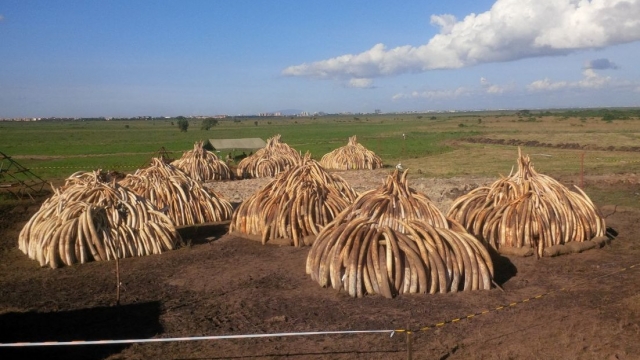 SMS
Kenya Says Its Plan To Burn 105 Tons Of Ivory Will Protect Elephants
By Ryan Biek
By Ryan Biek
April 24, 2016
The ivory burning at the end of April will be the largest ever conducted by a country.
SHOW TRANSCRIPT

Kenyan wildlife officials plan to burn 105 tons of ivory at the end of April in a move they say will protect elephants.

The ivory burning will be the largest ever by any country.

But critics have argued that destroying the tusks is a waste. Why not sell the stockpile that animals already died for and fund conservation with the proceeds instead?

For one, there's been an international ban on the ivory trade since 1989, so Kenya would have to resort to selling its stockpile through corrupt markets.

The stockpile's worth an estimated $30 million, but Kenya might actually have a different goal in mind.

Kenya's economy relies heavily on tourism. In turn, live elephants are one of the most vital parts of the industry that gave the country more than $2 billion in 2014.

The massive burning to come could generate a lot of attention for the issue and convince people not to buy products made from ivory.

Currently, China represents the biggest market for ivory, where large-scale campaigns to educate citizens have been going on for years.

A 2007 survey found that 70 percent of Chinese people didn't know elephants had to be killed to make the products. This type of PSA from Kenya could raise more awareness.

It still may not be enough though. A study published last year found a majority of people who buy ivory products say they'd support banning the sale. Yet, they still find a way to rationalize their own purchases.