Kenya Mall Was Attacked By Only 4 Men, NYPD Says 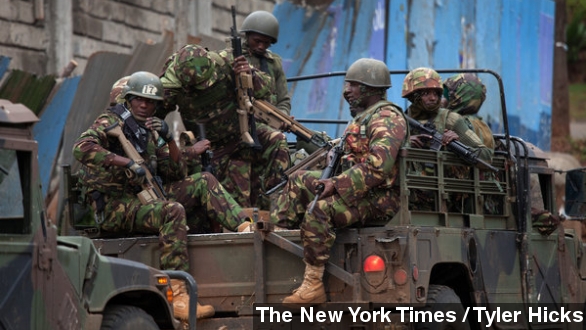 SMS
Kenya Mall Was Attacked By Only 4 Men, NYPD Says

By Christian Bryant
December 10, 2013
NYPD detectives said in a report the attack might have been carried out by just four men, who likely escaped.
SHOW TRANSCRIPT

Kenyan authorities initially said as many as 15 people were behind September's mall attack in Nairobi. But a report released Tuesday by the New York Police Department says there could've been as few as four attackers — all of whom might've gotten away.

Those findings come from NYPD detectives who were sent to Nairobi to investigate the attack. The NYPD presented the report to private security personnel in and around New York. (Via ABC)

Attackers believed to be members of al-Shabaab, an al Qaeda-linked terrorist group, killed more than 60 people at the upscale Westgate Mall in Nairobi. (Via Channel 4)

According to the report, the four attackers arrived at the mall around 12:30 p.m. on Sept. 21. They tossed three grenades and killed many of their first victims with AK-47s within the first 15 minutes. (Via CNN)

But the NYPD report says these men didn't have body armor, handguns or heavy weapons. They carried a few explosives and several hundred bullets in eight magazines. (Via The New York Times)

And although many news reports described the multi-day attack as a hostage situation, the NYPD says otherwise. The men killed as many people as they could. They only spared the lives of people who were Muslims and could name the mother of the Prophet Mohammed.

The men then hid out in a storage room. Twelve hours after the attack began, they spotted a CCTV camera, turned it away and possibly made their escape. Meanwhile, the siege continued for the next two days because authorities thought the men were still inside the mall. (Via The Guardian, CBS)

There was no mention of Americans being among the four attackers and the report refutes the claim that a British jihadi dubbed "The White Widow" played a role in the attack. But as NBC reports, the findings are critical of the Kenyan military and police response.

"The police department tactical team entered the mall at 3 p.m., without police markings or identifications, and were fired on by Kenyan soldiers, killing the commander of the unit.

"According to the NYPD report, the responding Kenyans 'had no idea what the mall looked like internally.'"

The report also alleges Kenyan soldiers looted the mall during the siege.

A writer for The Daily Beast spoke to the author of the presentation who said the attack on Westgate Mall was "simple ... effective and easy to copy."