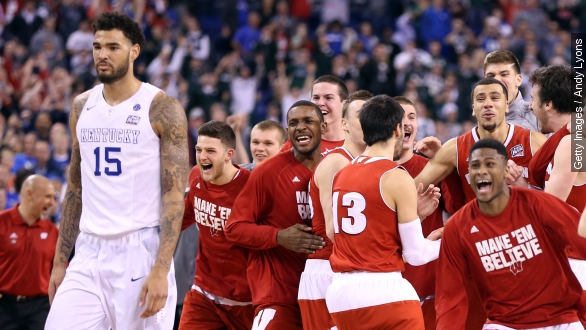 They might have 38 straight wins on the year, but Kentucky's first loss came at the worst time possible for them.

The Wisconsin Badgers defeated the previously unbeatable Kentucky Wildcats Saturday night 71-64. Badgers' big man Frank Kaminsky was the star of the game with 20 points and 11 rebounds.

Kentucky's stingy defense simply didn't hold and their offense couldn't make up the difference, but the Wildcats' loss was ugly in a few different ways. This was the scene in Wisconsin:

"This is a live look at State Street in downtown Madison. People are running out onto the streets, celebrating this huge win over Kentucky," WMTV reported.

Jubilant Badgers fans celebrated in the streets most the night. No arrests or property damage was reported by Madison police as just one person suffered accidental, minor injuries and was treated at the scene. On campus in Lexington, Kentucky though:

"Thirty-one arrested, mostly for disorderly conduct. Three people taken to the hospital with injuries. The path to perfection in no more," WHAS reported.

Not even Kentucky players could stay out of the negative spotlight though as Wildcats guard Andrew Harrison appeared to utter a derogatory phrase about Wisconsin's Frank Kaminsky during the post-game press conference.

Harrison publicly apologized for the comment, saying he called up Kaminsky and apologized to him too.

As for how Wisconsin defeated Kentucky, USA Today's Chris Chase praises the Badgers' execution. "Wisconsin used the textbook on how to beat Kentucky ... Shoot well, get rebounds, get Kentucky into foul trouble and don’t cower because of the 38 next to that zero."