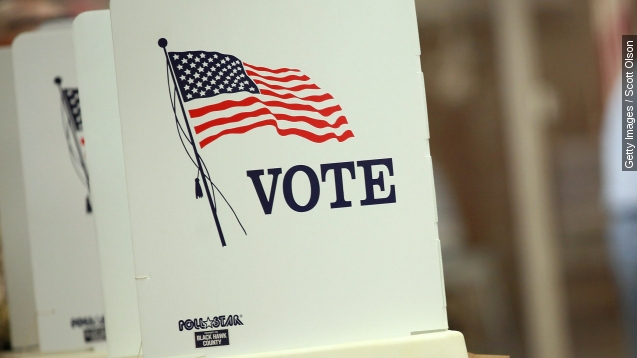 SMS
Kentucky Joins Majority Of Country In Letting Felons Vote
By Eugene Daniels
By Eugene Daniels
November 24, 2015
Kentucky's governor has signed an executive order granting released felons the right to vote. Surprisingly, it's one of the last states to do so.
SHOW TRANSCRIPT

"It makes no sense because it violates the principles of fairness, prolonging the punishment of convicted felons long after they've fulfilled the requirements of their sentences," Kentucky Gov. Steve Beshear said at a press conference.

With literally two weeks left in office, Beshear has issued an executive order giving voting rights to nonviolent offenders in the state.

The order only applies to nonviolent offenders that have been released from jail, have finished probation and parole and have paid all restitution. According to the Brennan Center for Justice, that covers about 170,000 people.

And it's not for lack of trying. In the past nine years, the Kentucky House of Representatives has passed 10 felon voting restoration bills that have died in the Republican-controlled Senate.

The order is part of a broader national movement to allow felons the right to vote. It seems like the issue is becoming, at least partially, less politically divisive. Republican presidential candidate Rand Paul has called for restoration nationwide.

The argument for disenfranchisement is that felons give up their rights after being convicted, but opponents say this impacts minorities disproportionately.

As you can expect, the move was met with different reactions. Kentucky's House minority leader took issue with the restoration being done by executive order but didn't seem to have an issue with the idea as a whole. (Video via Kentucky Educational Television)

Beshear's replacement, Gov.-elect Matt Bevin, has spoken out for restoration in the past but says he will have to look at the executive order during the transition process.