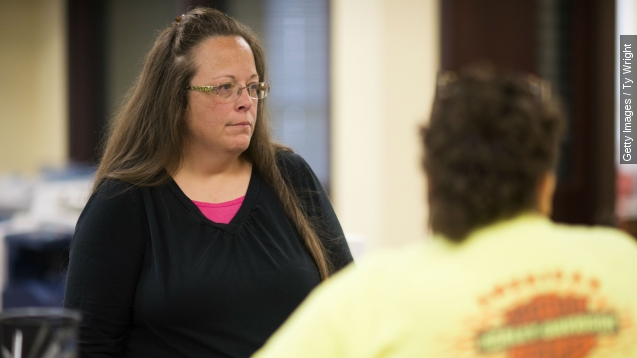 A judge has found Kim Davis in contempt of court. She's been taken into custody. (Video via YouTube / davidvmoore1976)

She's the Rowan County, Kentucky, clerk who refused to give anyone a marriage license.

"No, no. We're not leaving until we have a license," a man requesting a marriage license asked Davis.

"Then you're going to have a long stay. Good day," Davis replied.

The Supreme Court already denied her request to be excused from issuing same-sex marriage licenses.

Supporters of Davis rallied at the contempt-of-court hearing Thursday.

"From our survey of the crowd, we would say that, anecdotally, there's a larger group in support of Kim Davis," a reporter for CNN said.

Since she's an elected official, she can't be fired, but she could be impeached by the state legislature.