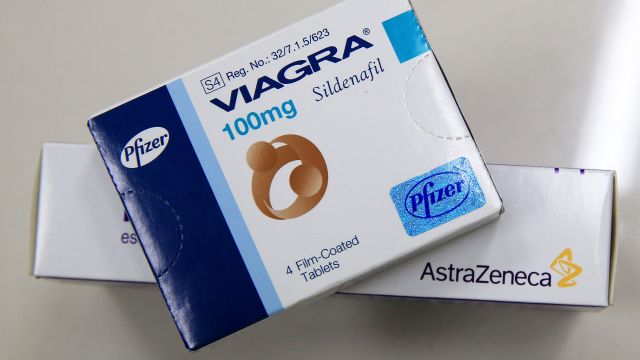 SMS
Kentucky Bill Would Require Viagra Users To Get Notes From Their Wives
By Ryan Biek
By Ryan Biek
February 15, 2016
The proposed Kentucky bill would also require men to visit their doctors twice before receiving medication for erectile dysfunction.
SHOW TRANSCRIPT

A new bill sent to the Kentucky House of Representatives calls for men to visit a doctor twice and bring a signed note from their wives before receiving medication for erectile dysfunction.

Men would also have to swear on a Bible to use the medication only for sexual relations with their wives. The bill's sponsor, Rep. Mary Lou Marzian, said, "This is about family values."

Marzian added she doesn't actually expect it to pass. Instead, the bill is meant to mirror the issues she sees in a recent abortion law.

Marzian, a Democrat, was one of only three representatives who voted against the "informed consent" bill earlier this month, which requires women seeking an abortion to receive counseling from a health professional at least 24 hours before the procedure.

"I am appalled that the Kentucky General Assembly, which very few have any medical degrees, feel that it is important that they insert themselves between a woman and her physician," Marzian told WDRB.

But some critics have argued Marzian's bill dismisses another serious issue.

Similar bills in the past were introduced in South Carolina and and Ohio in response to abortion laws.

This video includes clips from WHAS and WKYT and images from Getty Images.