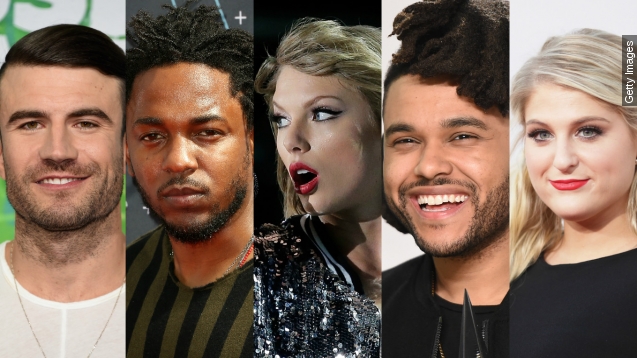 The nominees in the Grammy Awards' four major categories were announced Monday on "CBS This Morning."

As we could have predicted, Taylor Swift was nominated for Album of the Year, Record of the Year and Song of the Year.

Surprisingly, though, she is not the artist leading the pack. That would be Kendrick Lamar, who has 11 noms. T-Swift and The Weeknd follow him with seven nods each.

Overall, the nominations seem to be very eclectic. Album of the Year includes Alabama Shakes, and relative newcomer Chris Stapleton, who swept this year's CMAs as well. Record of the Year included the mainstays of Swift, Ed Sheeran and Mark Ronson. But it also included R&B artist D'Angelo and The Vanguard.

And if you're wondering why Adele isn't a nominee in any of these categories, it's because only music released between Oct. 1 2014 and Sept. 30, 2015 was eligible.