'Kayaktivists,' The Chukchi Sea And Is Big Oil Wiser Now? 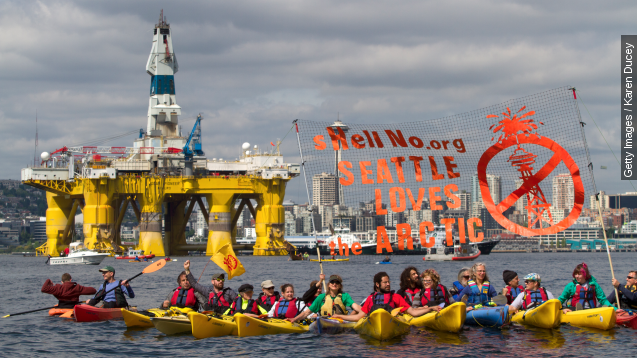 SMS
'Kayaktivists,' The Chukchi Sea And Is Big Oil Wiser Now?
By Cliff Judy
By Cliff Judy
May 16, 2015
Around 1,000 Seattle activists in kayaks were set to protest Shell's Arctic drilling Saturday. Has the oil industry learned from past disasters?
SHOW TRANSCRIPT

If you're not familiar with the term "kayaktivists" — well, get ready.

Around 1,000 of them are expected to paddle through the Puget Sound Saturday to protest the Royal Dutch Shell ships and oil drilling rig currently docked in Seattle. The ships are headed north this summer. (Video via KING)

Earlier this week, Shell won conditional approval from the U.S. Bureau of Ocean Energy Management to explore for oil in the Chukchi Sea off Alaska's coast. The move infuriated environmentalists who point to the infamous Deepwater Horizon explosion and environmental disaster as a worst-case scenario. (Video via Shell and RT)

But given an incredibly cautious public sentiment in wake of past tragedies and the enormous backlash if Shell did produce another disaster, has the oil industry learned from past mistakes?

The concern is certainly fair. The Chukchi Sea has far more extreme oceanic conditions and is far more remote than drilling in the Gulf of Mexico, making disaster response more difficult if something went wrong. (Video via U.S. Geological Survey)

Shell is pushing hard to present a message of safety. Ahead of its approval to drill in the Chukchi Sea in 2012, it released several videos explaining its response plans if something went wrong. It also pointed out features on its rigs meant to prevent a massive BP-like oil leak into the sea.

It also has a 12-point explainer on its website on how it would deal with a leak in the nearby Beaufort Sea. But part of that plan includes "using detailed ice and weather forecasting to warn of extreme conditions" — something it's seemingly already failed to do.

The rig mentioned in that Shell video we featured earlier was the Kulluk. When Shell tried to move the rig in late 2012 to avoid taxes, a Coast Guard report shows the tow master warned the rig it was a bad idea because the frozen conditions "guarantees an ass kicking."

Sure enough, the tow lines broke and Kulluk ran aground, forcing a Coast Guard rescue and eventually leading the Department of the Interior to rescind Shell's Arctic drilling approval. (Video via ODN)

And then there's a February report from the Bureau of Ocean Energy Management predicting a 75 percent chance there will be a large oil spill in the Chukchi Sea if drilling begins there.

That figure understandably inspired a flurry of foreboding headlines. But the bureau has since released a larger explanation saying the 75 percent figure is over the course of 77 years if the Chukchi Sea had hundreds of wells in production, not one company exploring the area.

A "large" oil spill is defined as anything leaking 1,000 barrels or more, which pales in comparison to the Exxon Valdez oil spill that dumped an estimated 257,000 barrels or the 4.9 million barrels spilled by Deepwater Horizon.

Ultimately, this is a crystal ball issue. The government has tried to make sure Shell is fully prepared for any situation in the name of a potentially huge economic impact.

But in doing so, it's also accepting the risk a largely untouched ecosystem suffers some kind of significant setback. (Video via Greenpeace)

A risk management consultant who used to work for Shell in the Arctic told The Atlantic, "Have we really worried enough about the potential of a catastrophic blowout? Have we learned enough about the prevention and mitigation of spills? At this point it’s an unanswered question.”