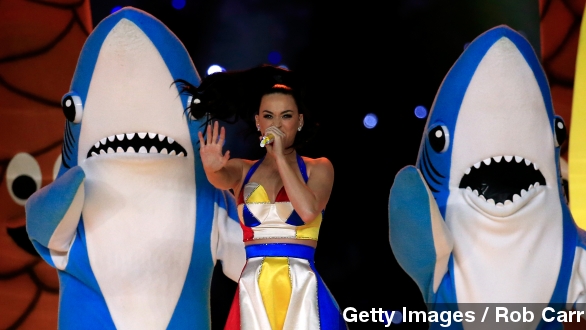 SMS
Katy Perry's Halftime Show Was All Pop Culture References
By Lauren Zima
By Lauren Zima
February 2, 2015
The pop star’s performance was ripe for references. Here are the ones Twitter couldn't stop obsessing over.
SHOW TRANSCRIPT

Katy Perry’s Super Bowl halftime show kept trending on Twitter long after the game was over.

And a big part of the Tweets? Pop culture comparisons. Perhaps like no other halftime show before, KP’s drew side-by-sides. She started the show in a dress made of flames...

Which had KERO asking, who wore it better — Katy, or … Will Ferrell?

Yeah. “Blades of Glory” Will Ferrell.

The outfit was also compared to one of Katy’s favorite things: Cheetos.

Then there were her dancing sharks. Perry’s jazzy jaws called up memories of “Street Sharks."

And a shark and fiery Katy together? Sharkboy and Lavagirl.  Well, those two were super heroes. She was at the ... Super Bowl.

And — Katy’s outfit that was all beach ball bliss in primary colors? Many said: reminiscent of Hot Dog On A Stick employees.

Plus, was the tiger she rode in on possibly borrowed from the “Power Rangers”?

But perhaps the most popular Perry comparison: our star ended things on a star. Literally. And many pointed out that Katy Perry looked a lot like a human ‘the more you know’ ad.

This video contains images from Getty Images and Paramount Pictures.