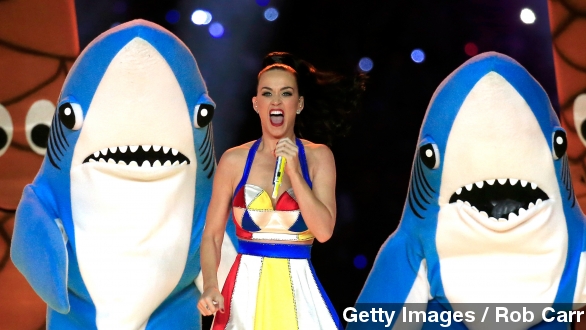 Well, that's one way to make an entrance. Katy Perry started her eccentric halftime performance by riding in on a giant tiger ... or lion ... or something.

We knew it was going to be an interesting halftime show with Katy Perry, but we didn't really see this one coming.

Perry started off her performance singing "Roar" while riding in on whatever-that-was. From there, she went on to perform on a chess board, do a duet with Lenny Kravitz, dance on a beach, hand things over to surprise guest Missy Elliot, then finish the performance off by making herself into a human firework.

The performance got mixed reviews with more leaning toward the "that was kind of weird" side.

Judging by Perry's previous run-ins with football this year, we were kind of expecting something unusual.

There's the time she threw corn dogs on the set of ESPN's College GameDay for some reason.

And her admitting she had to look up who J.J. Watt was before a photo shoot for ESPN The Magazine.

Watt, by the way, just won the AP Defensive Player of the Year — so he's a big deal.

The real winner of Perry's performance though might have been Snoop Dogg who dominated Twitter with this tweet — taking responsibility for being one of Katy's dancing sharks. Well done.