Katrina Showed How Important Local Journalism Can Be 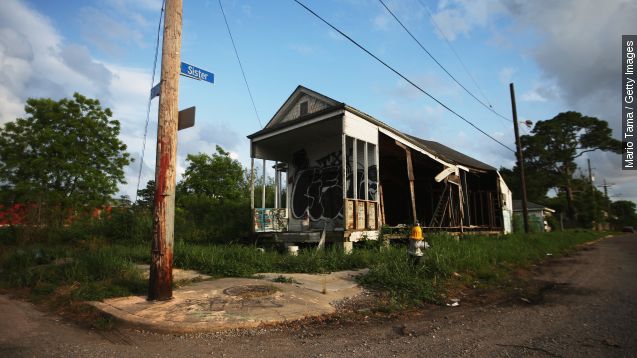 “My name is Andrea Miller and I am the Associate Dean for Undergraduate Studies here at the Manship School of Mass Communication at Louisiana State University. I’m also an associate professor," said Miller.

"My research area is primarily in crisis communication,” Miller said.

“Every crisis is different ... You have to realize that every crisis has its own nuances. Nowadays, every hurricane [journalists] cover, if it doesn't meet that Katrina standard, the coverage may fall short … Every [storm is] different. It’s gonna impact people in a different way," Miller said. (Video via Fox, The Weather Channel, Travel Channel and PBS)

“[The authors of 'Oil and Water: Media Lessons from Katrina and the Deepwater Horizon Disaster'] did a lot of content analysis looking at the different media coverage,” Miller said.

"We also talked to a lot of journalists … They were directly affected by Katrina. They lost their homes also. They lost loved ones," Miller said. (Video via WWL-TV)

“Katrina was such an interesting event in that nobody had ever seen anything like it before. It was an American city flooded, under water … It affected their coverage because they were living it as well,” Miller said. (Video via U.S. Coast Gaurd)

"We were in the [make-shift] control room [at LSU], WWL was broadcasting and it was right after the levees broke …  All of a sudden, this young lady … she started crying and got up and ran out of the room … the shot we were showing was a helicopter shot of the neighborhoods just under water. Out of that aerial shot she picked out her house,” said Miller.

“[Journalists] realized that they were a part of this and this was something that was going to influence the way they covered everything from now on,” Miller said of the journalists who participated in research for the book she co-authored. (Video via CBS and WVUE)

“Journalists are exposed to trauma often. Whether they’re the first one on the scene of a deadly accident, or if they’re covering something like Hurricane Katrina,” miller said.

“You want the skilled journalists who are covering these [traumatic events] to continue to do that. But you have to give them support … so that they can continue on,” Miller said.

"Everybody was just looking for any bits of information they could get and often it was from legacy media … all of the traditional or legacy media have a purpose and that really comes through in crisis situations," Miller said.

“When you do good coverage of a crisis event and your community … really sees that you’re doing a great job covering that event, they’re more likely to tune into you or buy your newspaper the next day, or the next crisis, because they know that you covered it well,” Miller said.

“People are very attached to their news media in New Orleans … Times-Picayune, the TV stations there … because, ya know, they were there with them. (Video via CBS and C-SPAN)

“It’s not that national doesn’t have its place because it absolutely does … But you really want your local press to focus on you,” miller said.

“They’re symbiotic, because not every crisis is gonna be in our backyard. So most of the time, [national media is] covering crisis events for us that are far away. And so we need their broad brush to tell us about whatever crisis that is ... You need that balance of both,” Miller said. (Video via ABC, NBC and CNN)

“The local journalist , the [Times-Picayune] journalists, the television journalists down there, they were immersed in this story. There were some times when, for example, they didn’t question some of the official statements that came from some of the entities in New Orleans like they should have because they were so close. There’s a sense that we’re in this together, ya know, you’re suffering, we’re suffering. And so some of the questions that should have been asked a little bit earlier on about some of the things that happened in New Orleans were not,” Miller said.

“National press has a tendency to frame things, 'Who’s responsible? … Who’s to blame for this? Why weren’t they evacuated?’ ‘Who did this?’ ‘Who didn’t do this?’” Miller said.

Where the local journalists … they’re worried about their neighbors … They tended to frame their stories in a way, 'What can we do to help our communities? What can we do to get out of this? How can I link you with the recovery agencies that we need to get help from?’" Miller said. (Video via PBS)

“It was a horrible, horrible event. But the local press tended to show it as more of, 'Okay, we are in this together. We can manage this. What do we need to do to get out of this?'” Miller said.

“We're still quite a bit in recovery mode … It highlights things that are being rebuilt. It highlights misuse of funds … housing problems, water issues, the corp of engineers, rebuilding the levees … It’s a lot of remembrance. But it’s a lot of, ‘Okay, where are we now? Where are we know?’” Miller said. (Video via The City of New Orleans and National Geographic)

“On the 10 year anniversary of Katrina, people need to remember how important their local news is. Not everybody’s gonna like every story that they cover. Some stories they might not think are important. But when crisis hits your community, when a natural or a man made disaster hits, you want those journalists on the ground advocating for you with their stories,” Miller said.