Katherine Webb Fires Back Against Criticism About Her Weight 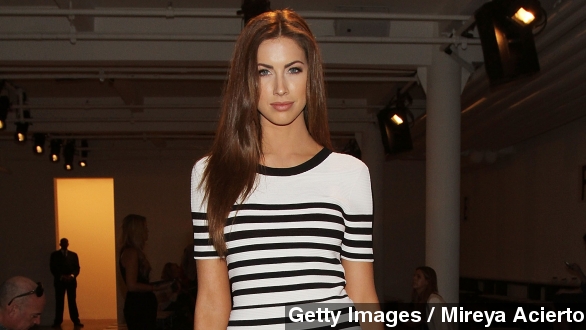 Model Katherine Webb fired back after people made hurtful comments about her weight last week. But now she's saying she might have taken things a bit too far.

On Feb. 10, Webb posted a photo of herself in a bikini to her Instagram account with the caption, "Getting ready for swimsuit season."

But just one day later, she posted a screen grab of some of the comments she received about the photo, most of which claimed she looked anorexic. She responded: "I eat just fine. ... To all the middle-aged women who like to leave mean comments on my page about my body, you can gladly skip my page and go somewhere else."

Maybe not the most tactful way to fight back. And Webb seemed to think the same when she spoke with "Good Morning America."​

"Saying she didn't mean to offend or single anybody out and that she reacted out of hurt," ABC reporter Linzie Janis said.

"It's a very sensitive topic for me because I dealt with self-esteem issues growing up," Webb said.

Webb is the wife of former University of Alabama quarterback AJ McCarron. He now plays in the NFL for the Cincinnati Bengals.

The two married last summer, and Webb explained to "Extra"'s Mario Lopez that her workout routine since then led to her thin physique.

"I wanted to be at home with AJ and relax, but at the same time, I get bored, and I want to start working again," Webb said.

Webb, who's quite tall at 5 feet 11 inches, also has a thyroid condition, which she says affects her metabolism.

She also said her pose in the photo affected her appearance.

Webb's physique has been a point of interest in the past.