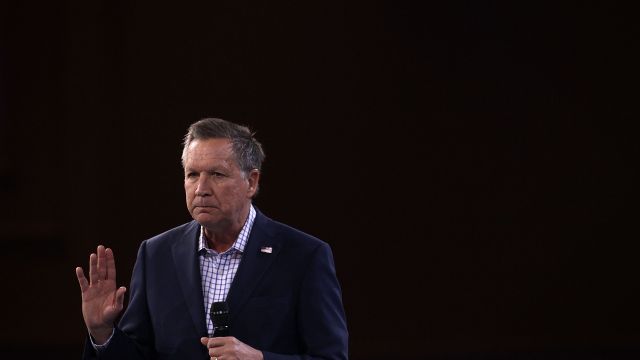 A staffer working for Ohio Gov. John Kasich's presidential campaign was fired Saturday after a domestic violence charge against him surfaced.

The Cincinnati Enquirer first reported that Kasich's deputy digital director Blake Waggoner was arrested on Nov. 12 after allegedly choking and hitting a woman. According to that report, Waggoner initially pleaded not guilty to one assault charge before apparently changing his plea to guilty.

Kasich's campaign swiftly dropped Waggoner after the Enquirer reached out about the story. Campaign manager Beth Hansen told the outlet, "Obviously, this kind of behavior is abhorrent and completely unacceptable. ... We were unaware of the incident concerning Blake, and he is no longer an employee of the campaign."

Kasich is currently trailing in the Republican primary and has yet to win a state. He has vowed to keep campaigning until the votes are cast in his home state of Ohio on March 15.

This video includes an image from Getty Images and clips from CNN and Fox News.