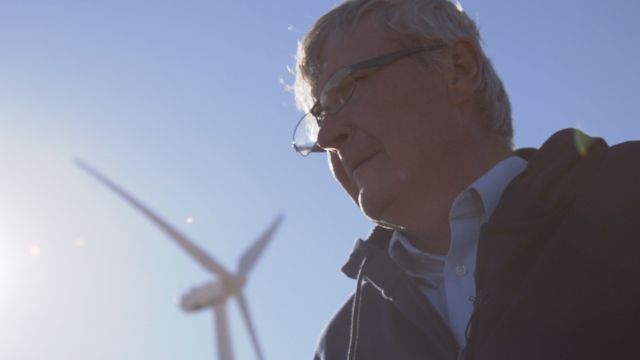 SMS
Meet The Small Town Destroyed By A Tornado And Rebuilt On Green Energy
By Zach Toombs
By Zach Toombs
October 17, 2016
Harnessing the wind through turbines, Greensburg, Kansas, now produces more energy than it consumes — and it's all clean.
SHOW TRANSCRIPT

After a tornado destroyed this small town, it rebuilt on a 100-percent clean energy plan.

"All of our pioneering ancestors were the original green people," Mayor Bob Dixson told us. "They drilled a water well when they settled here. They used the wind to pump the water out of the ground."

In 2007, Greensburg, Kansas, was forced to start again. And they started on a green energy grid. Today they produce more energy put onto that grid than they take off of it.

"May 4, 2007 — 95 percent of the community was leveled by an EF5 tornado," Dixson said. "It left us all homeless. My wife and I were in the basement, and it sucked the house right off the top of us."

When that tornado hit Greensburg, about half of the town’s 1,500 residents moved out. Those who stayed, including Mayor Bob Dixson, made a choice to try something new, despite the politics around it.

"Green to me in my generation in rural America was 1967, powder-blue bell-bottom pants, double-knit with a tie-dyed shirt, possibly on some mind-altering substances, hugging a tree," Dixson said. "That's what green was, because we played political football with the environment since then."

"So, the 23 member cities of our Kansas power pool share in the energy that's produced here."

And by harnessing the wind, Greensburg produces even more energy than it consumes. The town runs a wind farm south of town, while businesses and the K-12 school operate turbines of their own. And many buildings are designed to save energy and maximize clean energy.

"We use the turbines around here to help generate electricity," said Dana Maier, general manager of BTI Greensburg. "It helps our electricity bill, probably by about half."

"You see the lights aren't even on in this room," teacher Kim McMurry told us. "That's because they don't need to be. We have plenty of light in here, just daylight."

"We have a windmill out here that we utilize," said Randy Fulton, principal of Kiowa County High School. "It's more efficient, and we try to explain how that works in class. We try to incorporate that into our classes."

Post-recession, many parts of Kansas have struggled along with the rest of rural America. But with Google and Kansas City putting money into clean energy, the sector holds the promise of new jobs in this windy swath of the country.

So, is Kansas just a better place to collect wind energy?