Kaley Cuoco, Feminism And The 'Taken Out Of Context' Defense 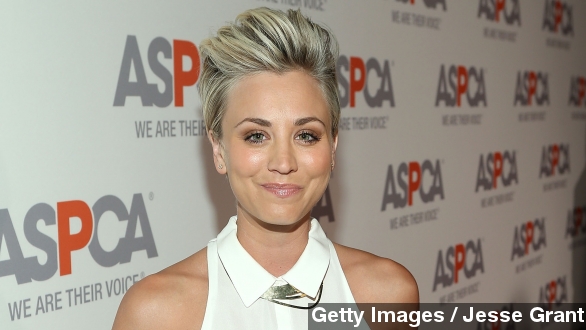 SMS
Kaley Cuoco, Feminism And The 'Taken Out Of Context' Defense
By Lauren Zima
By Lauren Zima
January 2, 2015
The "Big Bang Theory" star has responded to backlash over her comments about being a feminist, but her response is more typical than explanatory.
SHOW TRANSCRIPT

"Taken out of context." It's a favorite celeb go-to when backlash over an interview hits, and it's what Kaley Cuoco's kind of going with.

The actress Instagrammed this Thursday: "Some people have taken offense to my comments regarding feminism- if any of you are In the 'biz' you are well aware of how words can be taken out of context. ... I apologize if anyone was offended. Anyone that truly knows me, knows my heart and knows what I meant."

The controversy came after Cuoco's interview with Redbook. The magazine says when asked if she was a feminist, Cuoco responded:

"I was never that feminist girl demanding equality, but maybe that's because I've never really faced inequality. I cook for [my husband] Ryan five nights a week: It makes me feel like a housewife; I love that. I know it sounds old-fashioned, but I like the idea of women taking care of their men. I'm so in control of my work that I like coming home and serving him."

The response online was quick, with many pointing out that Cuoco enjoys the benefits of feminism.

She works on one of TV's biggest shows and, in an unusual situation for the notoriously sexist entertainment industry, is paid the same as her male co-stars.

The "taken out of context" defense was used by the late Joan Rivers when she spoke out about conflict in Palestine in August.

Actor Miles Teller used the phrase in October after he was criticized for his comments on the "Divergent" movie series.

"That was kind of taken out of context."

Ozzy Osbourne did the same in October over things he said about 9/11.

Basically, "taken out of context" seems to be the perfect way to be honest — celebrities aren't denying they said those things but are calling into question the validity of their own controversy-causing words.

And let's go back to what Cuoco said: "If any of you are In the 'biz' you are well aware of how words can be taken out of context."

So is she really saying her comments were "taken out of context" or just throwing that statement out there as a distraction from all of the fuss?

And Cuoco certainly hit on a touchy subject. Celebrities like Kelly Clarkson ...

... and Gabby Reece have come under fire recently for saying they aren't feminists or talking about "serving" their husbands.