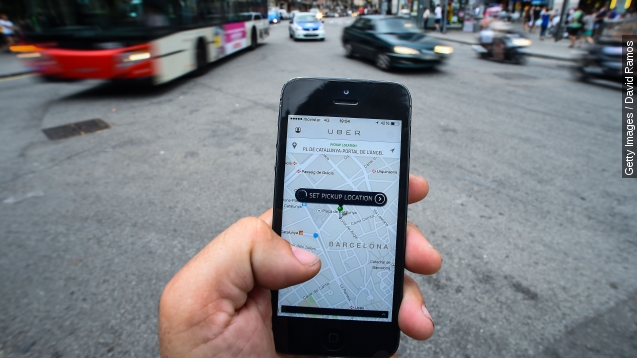 After five years of lawsuits, controversy, more lawsuits and a few multibillion-dollar valuations, Uber and its fearless leader, Travis Kalanick, remain undeterred and seemingly as confident as ever. (Video via Paramount Pictures / "The Wolf of Wall Street")

In a speech that sounds like a "Wolf of Wall Street" clip, Kalanick announced plans to continue expanding and hire more drivers, and he made no apologies for the company's continuing success.

"And today, just five years later, those original hundred friends and 10 drivers have become tens of millions of people in 300 cities across six continents. ... And in 2015 alone — this is just in the rest of the year — we expect another million people to drive with Uber," he said.

"Nearly every time we try to set up shop in a new city, there's a powerful industry with powerful allies who try to stop progress — you may have read about it in the news — who try at all costs to protect the status quo. ... Today, the transportation status quo is broken, and it's getting worse."

That defiant attitude from Kalanick is very much a hallmark of the company he created. Uber has battled city regulators and taxi unions in city after city across the world.

But that hasn't done much to stop the ride-hailing service's rapid expansion.

Wall Street is also licking its chops at the opportunity to buy into the company. Uber's last valuation placed the company's worth at about $41 billion – that's more than Delta Air Lines, Twitter and the CBS television network.

And while that's a lot of confidence in a 5-year-old company, if Uber can accomplish half the things Kalanick wants it to, it'll be well worth the money.

As a private company, Uber doesn't have to reveal how much money it has made in the past five years, but if Kalanick is to be believed, Uber is on track to earn $500 million annually in San Francisco alone — and according to him, that's 3.5 times more than the entire taxicab market in the city.