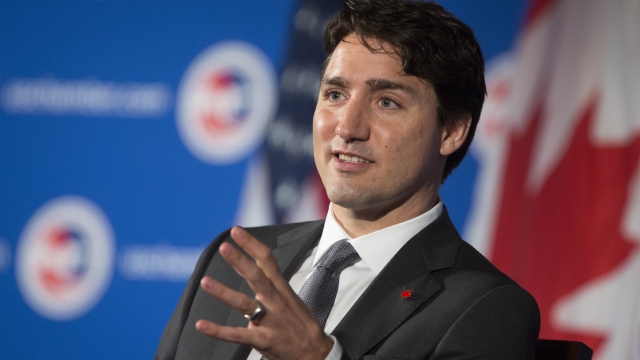 Canadian Prime Minister Justin Trudeau thinks it's time for Canada to legalize marijuana, but he says he doesn't care about any of the economic benefits that could come with it.

When speaking at an economic conference Wednesday, Trudeau was asked if he thought Canada "could be to cannabis what France is to wine."

"Look, our approach on legalizing marijuana is not about creating a boutique industry or bringing in tax revenue — it's based on two very simple principles," Trudeau said.

Trudeau argues that prohibition isn't doing much to keep marijuana out of the hands of minors in Canada.

He cited a 2013 United Nations survey of developed countries that found 28 percent of Canadian children ages 11, 13 and 15 had used cannabis in the previous 12 months.

Lack of legalization isn't keeping it away from U.S. teens, either. In one study, nearly 80 percent of 12th-graders said it would be easy for them to obtain marijuana.

Trudeau's second reason for wanting to legalize marijuana is the fact that criminals profit from the illegal drug trade.

So, Trudeau thinks legalizing the drug and placing it under government regulation would make it harder for kids to access the drug and would reduce the amount of money flowing to criminals.

But legalization might not have a huge impact on teen-use rates. Surveys of Washington and Colorado showed a slight increase after marijuana became legal.

This video includes images from Getty Images and clips from CBC, Dinafem Seeds / CC by 3.0 and Grow420Guide / CC by 3.0. Music provided courtesy of APM Music.