Justin Bieber Vs. One Direction: The New Pop Feud 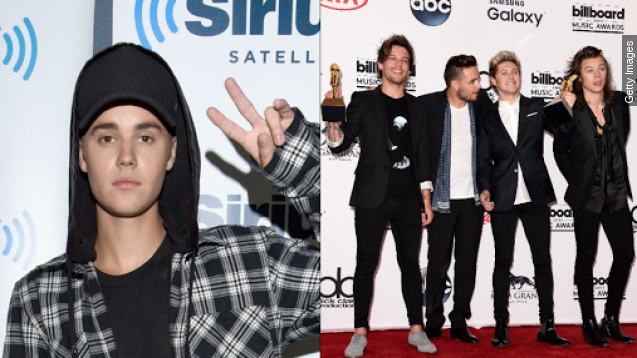 The One Direction-Justin Bieber dispute is today's version of the NSYNC-Backstreet Boys feud in the 2000s.

At least that's what it's being compared to after the Biebs threw some serious shade on Snapchat.

"The face you make when you come out with an album the same day as Justin Bieber," he said into the camera.

You see, both albums will drop Nov. 13. But Bieber made his announcement  Aug. 28, about a month before One Direction had the nerve to announce the same release date. (Video via Sony Music Entertainment / One Direction)

Cue the epic social media showdown between the legions of Beliebers and Directioners.

And like the boy band feud of my childhood, all parties involved are actually on good terms in real life. But that doesn't mean they aren't going to play up the competition to the public.

When Bieber went to New Zealand, a radio DJ asked him if he called "pal" Liam Payne to ask what 1D were thinking when they chose that release date. A version of the interview was edited and cut this comment from Bieber:

"I didn't give him that call. No, it's a friendly competition," Bieber said.

But then he followed up saying, "I don't know if they're really going on the road much, but we're talking about them right now, so gives them some promo, right? That's probably why they did it."

And we're right back in the game. Couple that with Louis Tomlinson and Payne's replies, and you've got World War III, boy-band style.

"That face you pull when you're playing the last night at the O2," Tomlinson said.

Oh, burn. Then Payne tweeted, "#breaking news my curtains are currently throwing shade at me... Should I be worried."

Obviously, this is all done in jest, but it might be a good idea to avoid Twitter on Nov. 13 unless you want your entire feed to blow up with people debating which album is better.

And let's remember, the label probably chose 1D's release date. So, like Backstreet Boys and NSYNC, the record companies are probably perpetuating the feud. (Video via Sony Music Entertainment / One Direction)