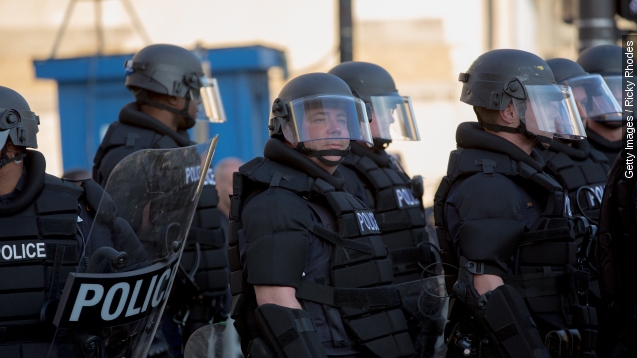 "The defendant proved by a preponderance of the evidence that he is legally excused of liability for those crimes because he caused the serious physical harm to the victims in a constitutionally reasonable effort," Judge John P. O'Donnell.

But on Sunday morning, the scene in downtown Cleveland was mostly calm.

"It is my expectation that we will show the nation that peaceful demonstration and dialogue is the right direction as we move forward as one Cleveland," said Mayor Frank Jackson. (Video via WEWS)

The chase that led to the deaths of Timothy Russell and Malissa Williams began by mistake: More than 100 Cleveland police officers pursued the two after reports of shots fired coming from their car. Prosecutors said that sound could've just been the car backfiring because Russell and Williams were unarmed. (Video via WOIO)

The chase spanned more than 20 miles, and when officers cornered Russell and Williams in a middle school parking lot, they began shooting — firing nearly 140 rounds.

Officer Brelo fired 49 of those shots, but judge O'Donnell said Brelo's actions were justified because of the "objectively reasonable perception" of a threat. Brelo was the only officer to face criminal charges because prosecutors claimed he intended to kill Russell and Williams, firing shots directly into their car after other officers stopped shooting.

In December, former U.S. Attorney General Eric Holder gave a scathing review of the Cleveland police department, saying they engaged in a pattern of using excessive force in situations when those tactics could've been avoided.

Five other officers involved in that 2012 shooting are awaiting trial for dereliction of duty charges. The Department of Justice released a statement Saturday saying it will review testimonies and evidence from Brelo's trial to determine if any other legal action should be taken.