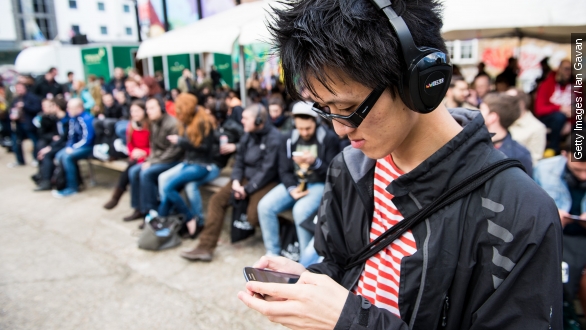 Concertgoers have always been outnumbered, but this is the first time the music industry saw the same money come in through digital platforms as physical formats like CDs and vinyl. (Video via Capitol Records / Coldplay)

That's according to London-based International Federation of the Phonographic Industry, which released its annual music report Tuesday.

Worldwide, digital sales accounted for $6.85 billion — or 46 percent of industry revenue. Physical sales took up the same percent with performance and licensing rights making up the remaining 8 percent. In the U.S. specifically, digital is king with 71 percent of sales.

While this trend was seemingly inevitable, the biggest drivers of the digital boost in the past year were subscription streaming services like Spotify, Pandora and a host of others now trying to get in on the market. Subscription service revenues rose an astounding 39 percent in 2014 and now make up nearly a fourth of digital's piece of the pie.

Of the rapidly growing services, IFPI noted the streaming music industry has 41 million paying customers with another 100 million using free, ad-supported accounts. IFPI wrote, "There is substantial untapped potential for growth within the paid-for category." (Video via Tidal)

As for the most popular music out there, it's probably not hard to guess. Pharrell Williams' "Happy" was the most-downloaded single of 2014 while Taylor Swift took home honors as the IFPI's recording artist of the year with the most sales across both digital and physical platforms. (Video via I Am Other Entertainment / Pharrell Williams & Big Machine Records / Taylor Swift)

This video includes images from Getty Images and Jason Devaun / CC BY ND 2.0.