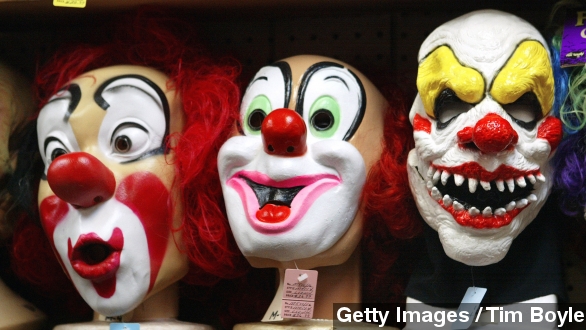 France has something of a Halloween clown epidemic going. Yes, clowns. And not your ordinary happy-go-luck clowns, but evil clowns. Oh, how we wish we were kidding.

ANCHOR VIA FRANCE 24: “Clowns armed with weapons, instead of balloons, have popped up here in France.”

Sure, some of these clown incidents popping up worldwide are pranks — really, really creepy pranks — but it’s apparently becoming a real problem for French police, with multiple cases of violence being reported.

COL. DAMIEN CHOUTET VIA FRANCE 24: “You can’t go around threatening people, scaring people or inciting violence. Anyone who does that risks prosecution, which isn’t funny at all.”

Just earlier this week, one northern French paper reported 14 teenage clowns were arrested outside a school while carrying a variety of weapons including pistols and knives.

The trend’s become so bad that one city’s mayor issued a decree banning all clown costumes for those older than 13 for a month, starting on Halloween.

And as we said, if you thought all of this was confined to France, it’s not.

Southern California has seen an influx in creepy clowns this month … and New York had its own clown outbreak in March in what many outlets believed was an apparent publicity stunt.

And a year ago, a clown in Northhampton, England was making headlines for just standing around scaring people.

Since then, London’s Metropolitan Police have dealt with 117 clown-related incidents according to a deputy editor at the Camden New Journal.

The current theories on why fear-inducing clown shenanigans are all the rage seem to point to social media. Whatever it is, we’re fine with it going the way of “planking” or the “Harlem Shake” any day now.