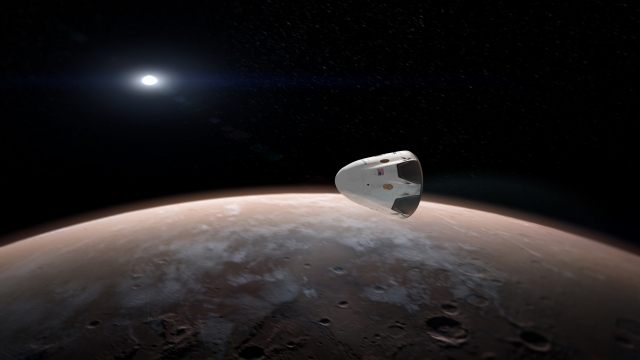 SMS
Just How Ambitious Are SpaceX's Mars Plans?
By Evan Thomas
By Evan Thomas
April 30, 2016
SpaceX wants to get to Mars by 2018. Getting there isn't hard, but other things, like landing, are.
SHOW TRANSCRIPT

SpaceX wants to get to Mars within two years. That's pretty ambitious, even by spaceflight standards. Private companies haven't broken out of orbit around Earth yet.

First off, it assumes SpaceX's Falcon Heavy rocket gets off the drawing board in time to launch a Mars-bound mission. The expected debut has slipped a couple times already.

Money isn't as much of a challenge. In spaceflight terms, getting something to orbit around Mars is relatively cheap. India put a probe around the red planet on its first try, with four years and about $73 million. A single Falcon 9 launch costs only about $61 million.

Landing on Mars is where things get tricky. Mars' atmosphere is thinner than Earth's, which makes it less useful for slowing down. SpaceX's rocket-powered landing would help get around that.

But a Dragon capsule would still be about six times heavier than the Curiosity rover NASA landed on Mars. More weight means higher stakes.

And Curiosity didn't explode on landing — which is more than SpaceX can say sometimes.

The endgame, of course, is humans. NASA thinks it can get a human crew to Mars by the late 2030s. SpaceX has proposed doing the same by 2025.