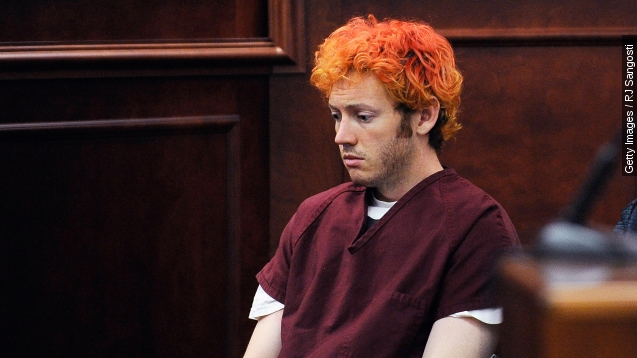 Reading the verdict, Judge Carlos Samour Jr. said "We the jury find the defendant, James Egan Holmes, guilty of murder in the first degree after deliberation."

The 27-year-old opened fire at a theater in Aurora, Colorado during a midnight viewing of "The Dark Knight Rises" on July 20, 2012.

The attack killed 12 and injured another 70 and was one of the deadliest shooting massacres in U.S. history. The capital murder trial for Holmes began April 27, 2015.

Holmes pleaded not guilty by reason of insanity. His public defenders cited a psychotic break as his motivation for the shooting spree.

Throughout the trial, defense attorney Dan King gave jurors a glimpse of what is regarded as one of the most critical pieces of evidence: Holmes' journal. The killer mailed the 29-page entry to a psychiatrist days before the attack. Inside were handwritten plans with stick figures detailing the impending violence at the theater. (Video via KMGH)

ABC called it the "battle of the psychiatrists" as two court-appointed psychiatrists noted Holmes' mental illness but deemed him sane at the time of the shooting. Two defense psychiatrists disagreed, saying a psychotic break caused his actions.

Nine thousand potential jurors were summoned in January 2015. Each had a 0.2% chance of being selected. It was regarded as one of the nation's largest jury calls.

Holmes' parents attended every day of the trial, only speaking to the public a few times. In a letter published on The Denver Post in December 2014 his parents wrote, "As the parents of James Holmes, we have spent every moment for more than two years thinking about those who were injured, and the families and friends of the deceased who were killed, in the theater shooting in Aurora. We are always praying for everyone in Aurora. We wish that July 20, 2012, never happened."