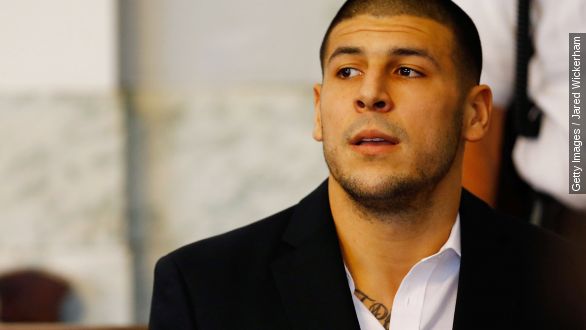 Former New England Patriots star Aaron Hernandez has been sentenced to life in prison without the possibility of parole. A jury found him guilty Wednesday of first-degree murder in the 2013 shooting death of former semi-pro football player Odin Lloyd.

“Guilty of murder in the first degree.”

The jury's verdict comes after seven days of deliberation in a murder trial that lasted more than two months. The jury was presented with testimony from 135 witnesses, 439 exhibits and thousands of pages of phone records. (Video via CNN)

Although Hernandez pleaded not guilty to first-degree murder of the then-27-year-old Lloyd, Hernandez's lawyers said the former Patriots player was present when Lloyd was killed. The defense contends one of Hernandez's two associates fired the fatal shots. (Video via WBZ-TV)

"He was a 23-year-old kid who witnessed something: a shocking killing, committed by somebody he knew," Hernandez's defense attorney James Sultan said to the jury. (Video via WPRI)

Even though this case is over, Hernandez still faces a double-murder indictment in the 2012 shooting deaths of two men in Boston. That trial is set to begin later this year.