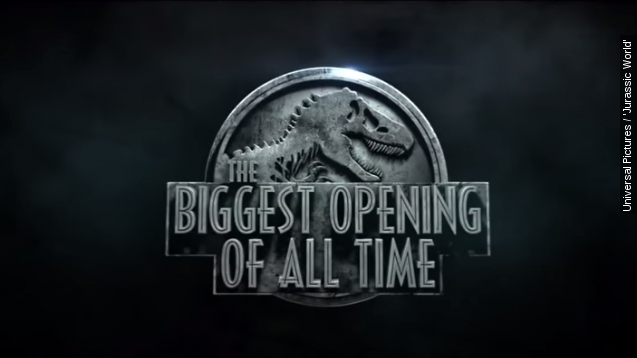 With the dino movie soaring past the $500 million mark overseas, "Jurassic World" has become the fastest film to reach $1 billion globally.

Let's take a look at that velociraptor race to the top.

By that Friday, the film had grossed $82.6 million domestically. If you subtract the Thursday night earnings, it leaves the Chris Pratt thriller with a "pure" Friday gross of $64.1 million.

That broke the record for biggest opening gross day ever, previously held by Universal's other 2015 megablockbuster, "Furious 7."

By Monday, June 15, the film had broken the domestic, international and global opening weekend records. It brought in $208.8 million domestically and $315.3 million internationally for a combined total of $524.1 million.

In its sophomore weekend, the film earned $106.5 million  — officially making it the biggest non-opening weekend of all time.

As if these records weren't enough, on Monday, June 22, the mega-blockbuster became the fastest movie to gross $1 billion worldwide. It's a monstrous-sized feat that occurred a mere 13 days after release.

The previous record was, again, Universal’s "Furious 7," which reached $1 billion in 17 days.

And we can't forget about Chris Pratt's personal record. This has become the biggest debut for the star; his previous record was a $94.3 million opening for 2014's "Guardians of the Galaxy."

This video contains a video from Getty Images and music from Revolution Void / CC BY 3.0.