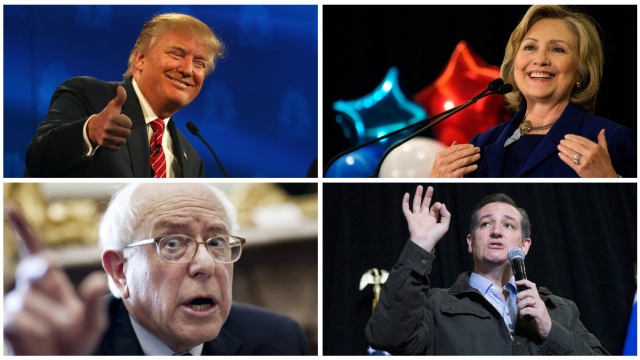 By Christian Bryant
April 25, 2016
From Trump's plane purchase to Clinton's pizza tab for campaign staffers, we take a look at candidates' spending and what it says about them.
SHOW TRANSCRIPT

You can tell a lot about a person based on how they manage their money. So, what better way to hypothesize about who will make the better president than to look at how candidates have spent their money over the years?

We already know which candidate has probably spent the most on any one purchase.

Trump reportedly bought his Boeing 757 passenger jet — nicknamed "Trump Force One" — for $100 million back in 2011. It's a preowned plane, and Trump uses it to travel on the campaign trail.

If there's one thing we can glean from Trump's purchase, it's that a President Trump will spare no expense.

On the opposite end of the spectrum, Democratic presidential candidate Bernie Sanders has specifically talked about sparing expenses.

"I do not own a tuxedo," Bernie Sanders told Time.

The only problem with President Sanders is getting him in a tux for state dinners.

If there's one thing that stands out about Hillary Clinton's purchases, it's how much money she allocates for food.

News site Vocativ claimed that "Clinton's campaign runs on pizza" after finding that at one point, two-thirds of her campaign budget for fast food went to pizza. She and her crew even racked up a $1,200 tab getting pizza in Iowa.

But Republican presidential candidate Ted Cruz will not be outdone on food. He told Us Weekly that he loves soup and has dozens of cans in his pantry at home.

This soup obsession has been well-documented. Cruz's wife, Heidi, told Anderson Cooper: "We got back from our honeymoon, and he went off to the store. I was completely shocked to see that he arrived back at our apartment with literally 100 cans of soup."

But at least one Fox News guest thinks the soup talk is distracting us from getting to really know a potential POTUS.

"If you think the weirdest thing that Ted Cruz is into is soup, you're lying to yourself," comedian Kate Wolff said.